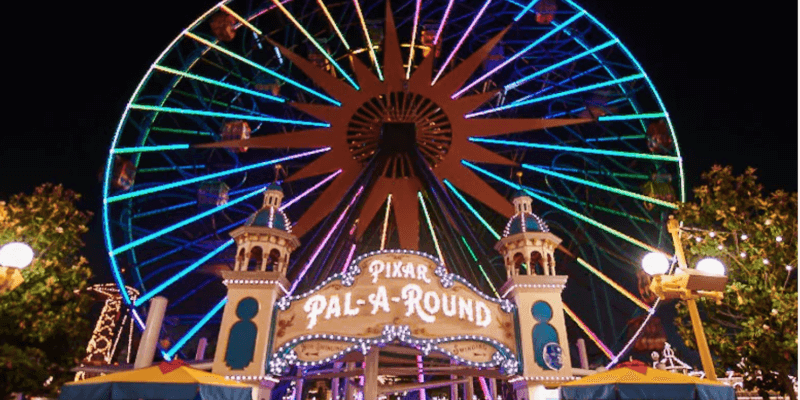 The Pixar Pal-A-Round is a devious attraction. A landmark centerpiece of Disney California Adventure Park at the Disneyland Resort in Anaheim, California, is far more thrilling than it appears. And if you don’t pay attention, you can get a much more exciting ride than you wanted.

Unfortunately, this was the case for one guest back in October 2019. While visiting the park with her family, she decided to ride Pixar Pal-A-Round with her uncle and her cousins.

Now, for those who do not know, there are two different ride experiences available on the Pixar Pal-A-Round. There are the stationary gondola cars–your traditional, gentle ferris wheel ride–and then there are the other gondola cars. Those other cars swing independently on their own interior tracks. There are no seatbelts, and when you are 150 feet in the air, a sudden jolt down can feel like you’re falling. Believe us, it is not for the faint of heart.

This poor woman was tricked onto the other gondolas. She said, “I was tricked into getting onto the ride by my uncle and cousins who told me we were getting on the non-swinging ones.” When she found out, it was too late. Her ever-so-loving family then filmed her experience, which you can watch here:

The boarding zone for the Pixar Pal-A-Round is tricky! If you are not paying attention, it just looks like two lines for the same ride. It is easy to trick unsuspecting friends and family who are expecting a nice enjoyable ride around. So, there is no doubt this woman was the first person to be pranked in this way.

The Pal-A-Round is one of only two Ferris Wheels in the United States to feature fixed and sliding gondolas simultaneously. The other is Coney Island’s Wonder Wheel in New York.

Have you ever ridden the sliding gondolas on the Pixar Pal-A-Round? Have you ever tricked someone onto the ride? Let us know in the comments!