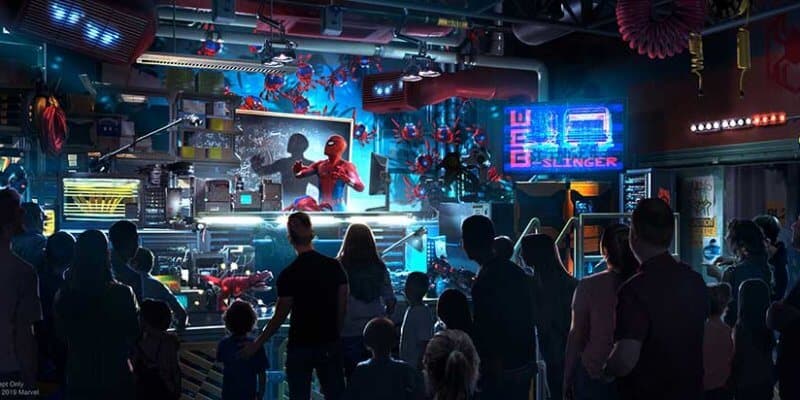 Suit up, Avengers fans! It’s almost time to live out your superhero dreams because Disney’s newest Marvel-themed land is opening soon. Disney just announced that Avengers Campus, the superhero land currently being constructed at Disney California Adventure, will open in summer 2020. And now we finally have more concept art to share with you!

It’s official: Avengers Campus will begin welcoming new recruits in summer 2020. And while we don’t have an official opening date yet (and we don’t know when we can expect the land’s e-ticket attraction to open), we’re definitely excited that we will only have to wait a few more months until we get to experience this awesome new land. We shared an entire guide to everything we learned about Avengers Campus at D23 Expo this past summer, but now that Disney has officially released even more concept art and details, we’re happy to share those.

Related: Marvel’s presence in Disney Parks: All about Avengers Campus at California Adventure

Below you will find the latest concept art Disney has released for the new Marvel-inspired land at California Adventure, as well as Disney’s official de

An Overview of Avengers Campus

As we’ve previously shared, this campus is set up by the Avengers to recruit the next generation of Super-Heroes.

As Super Heroes continue to assemble at the campus, one of its iconic buildings will be the Avengers Headquarters where you should be on the lookout for Avengers in action.

Avengers Campus is home to the Worldwide Engineering Brigade – also known as “WEB” – which will house the new Spider-Man experience, the first Disney ride-through attraction to feature this iconic Super Hero.

During an open house at WEB, the aspiring inventors are excited to invite you for a test drive of their latest invention: the “Web Slinger” vehicle, which allows you to sling webs just like Spider-Man! The attraction gives you a taste of what it’s like to have actual superpowers as you help Spider-Man collect Spider-Bots that have run amok.

Avengers Campus will also feature Pym Test Kitchen. Just as Ant-Man and The Wasp use “Pym Particles” to grow and shrink just about anything, Pym Technologies is using the latest innovations to grow and shrink food at this eatery.

Meet and Greets with the Avengers

You will also find heroic encounters throughout the campus, including Black Widow, Ant-Man and The Wasp, Doctor Strange, the Guardians of the Galaxy, Super Heroes from Wakanda and Asgard, and Iron Man.

Book a Trip to the Disneyland Resort!

We know we don’t have an official opening date for Avengers Campus, but since we know it will be opening in summer 2020 you have a few options for booking a trip. You could book a trip for sometime this summer and hope that your trip dates align with the opening of the new superhero land, or you could book a trip for next fall so you can pretty much guarantee the land will be open during your visit.

No matter when you decide to book, you’re sure to have a fantastic experience at Disneyland Resort’s two theme parks, Downtown Disney, and three on-property hotels. Click here for a free, no-obligation Disney trip quote from the Authorized Disney Vacation Planners at Academy Travel to experience all the magic of Disneyland!

Are you excited for Avengers Campus to finally open at Disney California Adventure in summer 2020? Let us know what you hope to experience in the land next year!