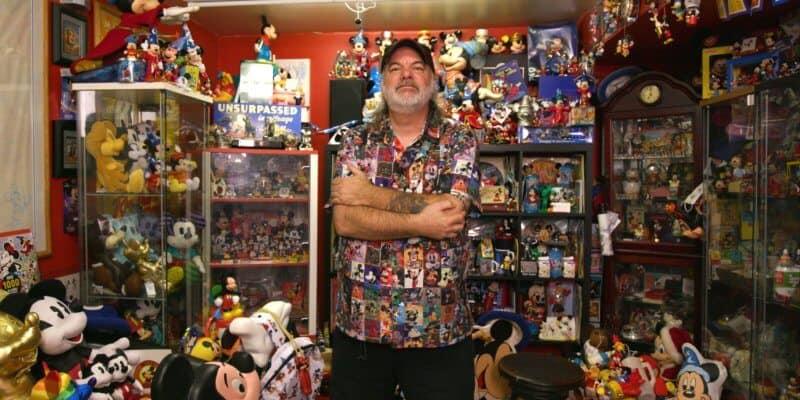 Paul Bottos of Ontario, Canada, says he grew up in a dysfunctional family. His family packed up and moved frequently—so much so that before he was in high school, he had already attended 17 different schools.

And it seemed to only get worse from there. At age 13, he was placed in foster care, and as a teenager, he participated in riot at his school, which landed him in jail for six months. But according to Bottos, his life changed in his twenties when he became a Mickey Mouse fan.

“My wife was collecting Beanie Babies, and I picked up this Mickey Mouse and thought, ‘it would be nice to have some more of these.’” Bottos said in an interview.

So he started collecting Mickeys—Mickey figurines, Mickey Funko Pops, Mickey plush dolls. His collection is astounding and includes items dating back to the 1930s.

Bottos also points out three Mickey Mouse-themed tattoos across both of his arms. “For me, this is my focus in life.”

Bottos, who has now retired from his work as a manager of psychiatric hospital for troubled youth, says that he was introduced to Mickey Mouse at a time in his life when he knew he had to make some changes and turn his life around.

Bottos worked to make those necessary changes in his life and says that there were several times that Mickey “gave [him] focus and something to look forward to.” He says it was always an adventure.

Just 10 years ago, he thought about giving up his Mickey obsession. He even considered selling his entire collection to the owner of a toy museum. But his son Dakota, who is now 22, was adamant that he keep his collection because of a special meaning the collection has for both Bottos and his son.

Seventeen years ago, Bottos’s wife passed away. Dakota was only 5 years old. And collecting Mickeys became something they shared together. That collecting even inspired Dakota to start a collection all his own of Walking Dead ephemera.

“If you enjoy something, as long as it’s not detrimental to you or causes difficulty to other people, then I think people should go toward those things and surround themselves with it,” Bottos explains.

And since it doesn’t seem to be detrimental or difficult to Bottos, his son or anyone else, surely he and his son will keep collecting for many years to come. And what a great collection to have any day, but especially on Mickey’s 91st birthday, which happens to be today.

Comments Off on Mickey fan: ‘Mickey saved my life, allowed me to live a childhood’