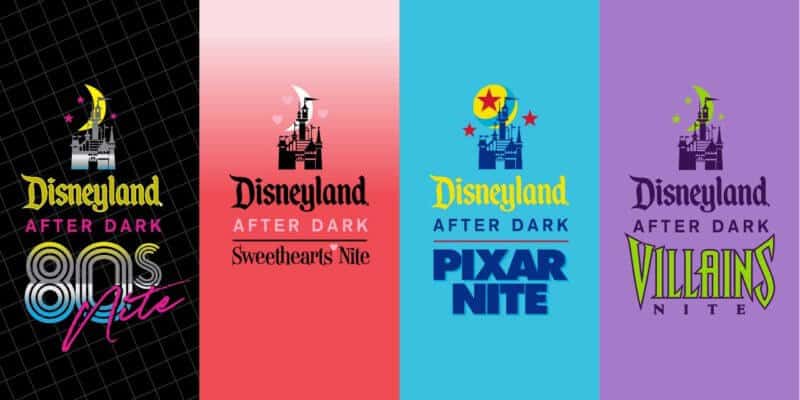 Disneyland After Dark is a special themed event which takes place after hours in the park.

Featuring one-of-a-kind entertainment, delicious food, special photo opportunities, unique merchandise and more, Disneyland After Dark returns next year and kicks off in early 2020. This year, there will be four different themed events at the Disneyland Resort.

Keep in mind, Disneyland After Dark is a separately ticketed event which grants you access to either Disneyland or Disney California Adventure park after it closes to the public.

Certain Disney attractions will remain open for event guests and you will also receive unlimited digital downloads of Disney PhotoPass photos taken during the party!

Check out the 2020 Disneyland After Dark event details below.

Disney guests can stroll down memory lane and take it back to the 80s during this throwback party. 80s Nite is packed with tubular fun so make sure you break out off those leg warmers, shoulder pads and other vintage items just for 80s Nite. Here’s what’s included:

February 12 and February 13 at Disneyland Park.

Disneyland will transform into a romantic date night, complete with Disney magic and a pinch of pixie dust! This event was such a hit last year, Disney just had to bring it back. If you missed last year’s Sweethearts’ Nite, here’s your chance to have the most epic date night. Here’s what’s included:

If you are a fan of all things Pixar, then you have to spend the night celebrating some of Pixar’s most loved stories and characters at PIXAR Nite. Here’s what’s included:

Calling all villains fans — Break out your inner villain at this sinister party. Here’s what’s included:

Visit Disneyland.com for more details and pricing. Be aware that a limited quantity of tickets for each event will be available beginning next week:

Which of these Disneyland After Dark events do you want to attend? Let us know in the comments.

Comments Off on Just Announced: Disneyland After Dark event dates for Winter/Spring 2020