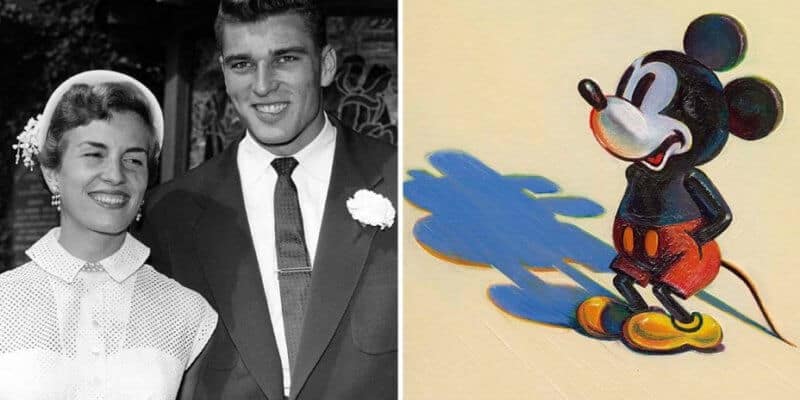 Walt Disney had two daughters, each of whom were the inspiration behind his dream of building Disneyland and later, Walt Disney World.

Before her passing in November 2013, Walt’s eldest daughter, Diane Disney Miller, put her heart and soul into memorializing her father for generations to come. She worked to document his life, his works and his achievements, as Walt passed away before many of his dreams could come to fruition. Fans can see many items and artifacts that do just that at the Walt Disney Family Museum in California.

Miller also established the Walt Disney Family Trust, a charity in her father’s name that benefits not one, but several charitable organizations, such as the Jane Goodall Institute, the HALO Trust, the Youth Orchestra of Los Angeles, and the Los Angeles Philharmonic that is housed at the Walt Disney Concert Hall.

Miller also had an affinity for collecting artwork, especially contemporary art–and this week, an auction held at Christie’s in New York opens and is expected to yield high returns that will go to the Family Trust–to the tune of almost $14 million. What’s up for grabs? Miller’s massive art collection that includes works on paper, sculptures, paintings, and drawings.

The Miller collection brought joy to Disney’s daughter and her husband, and thanks to the auction, a few fans will get to experience that joy too. One of the pieces from the collection called “Ocean Park #108” by Richard Diebenkorn is coveted by art collectors.

“It’s sort of a celebration of the American landscape,” Barrett White, Executive Deputy Chairman at Christie’s said in an interview. “Ultimately, Walt Disney and the Walt Disney Company have brought this sense of optimism to America and to the world, and that feels very much like it follows through in the sentiment of [this art] collection.”

“Ocean Park #108” by artist Richard Diebenkorn is expected to bring as much as $9 million at auction. Diebenkorn was dispatched to Hawaii during World War II so that he could work in cartography with Disney animators. “Ocean Park #108” is the most coveted of all of Diebenkorn’s pieces. It accentuates the beauty of Southern California, which was one of Walt’s favorite spots in the country.

Another piece in the collection that is expected to bring somewhere between $3 million and $5 million, is “Oliver’s Cap” by artist Andrew Wyeth.

“Disney is all about magic, and there’s a story of magical thinking in the Wyeth [piece] that relates to that Disney sensibility,” Barrett White of Christie’s explained.

The most overtly Disney-themed piece in the collection is a piece by Thiebaud who worked as an apprentice illustrator with Disney. He worked on characters like Jiminy Cricket and Pinocchio and who became known for his bright paintings of everyday objects. The work is called “Mickey Mouse,” and it was created in 1988. It goes on sale on the morning of November 14 and is expected to bring as much as $600,000.

Would you hang any of these works of art in your house? Let us know in the comments section below!