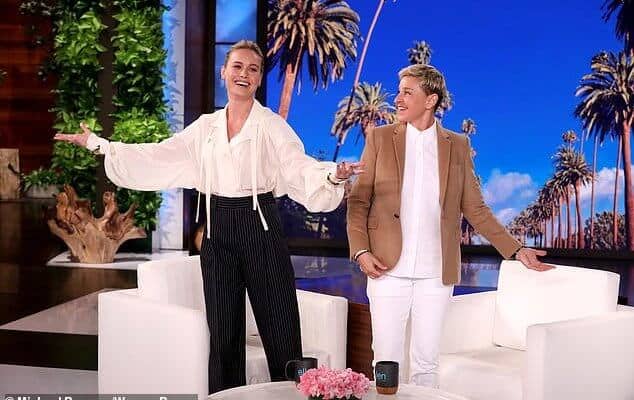 Captain Marvel’s Brie Larson was recently interviewed by Ellen Degeneres on her show, Ellen. During the interview, we learned some interesting facts about the star’s lack of incentives from Disney. Something that might come as a surprise to fans, considering her participation in the massively successful Avengers franchise has brought the company such financial success.

In her interview with Ellen this past Wednesday, they talked about Avengers: Endgame, which Larson jokingly called “the little movie that could.”

“Avengers: Endgame” has totaled $853 million at the domestic box office, making it the second-highest-grossing movie in North America behind “Star Wars: The Force Awakens” ($936 million). The movie, which has already grossed nearly $2.8 Billion dollars worldwide! When Ellen made note of the film’s success, Larson responded with, “so it did ok.”

Ellen goes on to ask Larson if she had any sort of back end deal on the movie makings. Brie then takes the opportunity to note that she “doesn’t even have a Disney+ account comped.”

That might come as a surprise to fans who might assume Disney stars get all the pixie-dusted benefits available when they have brought the company such massive success. However, it seems Larson, like the rest of us, has to pay up if she wants access to the massive Disney+ library, which happens to include the entire Avengers franchise.

If you subscribe to Disney+, you can even watch one of Larson’s very first films she ever worked on. The movie, “Right on Track,” also happens to be a Disney Channel Original Movie!

Brie takes the opportunity to make the plea to Disney to grant her access to their new streaming platform during the interview. We’ll see if she gets her wish. Maybe an early holiday gift? We know a Disney+ subscription would make an epic Christmas gift!

While we wait to find out if she does get her holiday wish, we can entertain the thought of an all-female Marvel movie, something Larson has shared an interest in. That’s a film we would not miss!

We hope Brie gets her Disney+ wish, and that Disney and Marvel do entertain the idea of an all-female cast for a new Marvel movie! Would you like to see that happen too? Let us know in the comments!