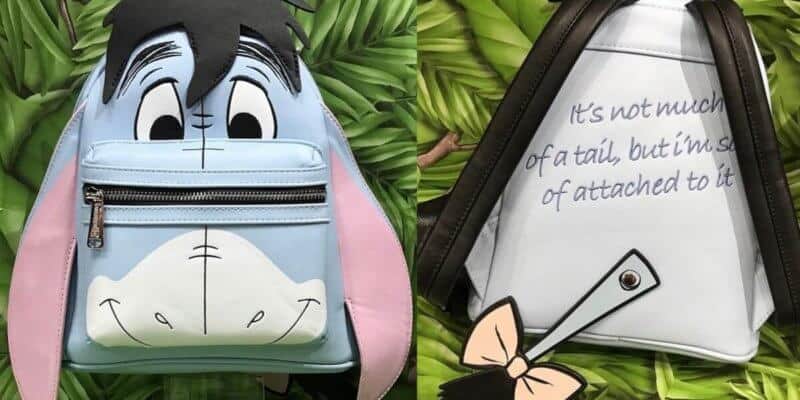 Each and every “Winnie the Pooh” character has their own distinct character traits, and of course, everyone has a favorite they can personally relate to. f you are a fan of the cuddly donkey, Eeyore, then you have to check out the brand new Loungefly backpack that features the beloved Disney character.

Growing up, I always loved watching “Winnie the Pooh.” We all had our favorite stuffed animals that we played with day in and day out, pretending to venture into a far off land and not worry about anything. It’s part of being a kid. I think that’s why I always felt like I could look up to Christopher Robin. His love for Pooh Bear, Piglet, Tigger, Eeyore, and the rest of the gang was something I always admired and could relate too.

Eeyore may be known as the gloomiest resident of the Hundred Acre Woods, but that just gives us all the more reason to fall in love with him and want to just cuddle him up.

You can check out this absolutely adorable Eeyore inspired Loungefly backpack below.

The cuddly donkey is known for his witty comments and quotes, and one is even featured on the brand new Loungefly backpack!

“It’s not much of a tail, but I’m sort of attached to it.” Although Eeyore may always seem down in the dumps, he somehow brings light to the situation and always makes sure to look on the bright side, a great lesson for everyone!

This Eeyore backpack isn’t the only “Winnie the Pooh” Loungefly merchandise available through BoxLunch. Venture into the Hundred Acre Woods with an adorable Hundred Acre Wood map themed backpack, perfect for any adventure that awaits!

Will you be adding the new Eeyore inspired Loungefly backpack to your collection?