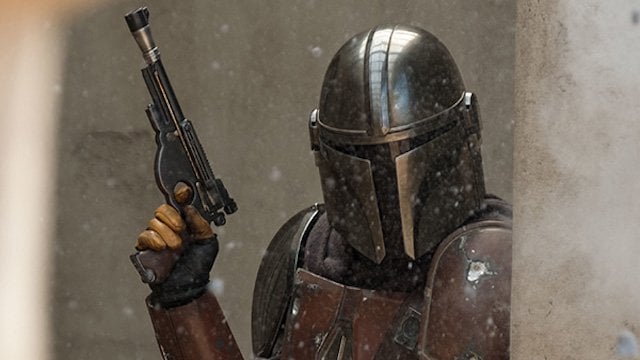 Heads up, Star Wars fans. If you’re hoping to enjoy every aspect of the Star Wars universe spoiler-free, you might be in for a rude awakening. News just broke that the first episode of  The Mandalorian contains a major  Star Wars spoiler. Here’s what you need to know.

The New York Times just published a report all about Disney’s new streaming service, Disney+, which launches in just a matter of weeks on November 12. And since The Mandalorian — an all-new Star Wars show that Lucasfilm has developed for Disney+ — is making its debut as soon as Disney+ launches, we’re not surprised that the Times wants fans to brace themselves for what’s to come in the new show.

In case you’re unfamiliar, let’s catch you up. Disney+ will be the one-stop shop for all things Disney, Marvel, Pixar, Star Wars, and National Geographic online. It will house a huge library of content, as well as all-new content like The Mandalorian that’s making its debut on the platform on November 12 and beyond.

The first-ever live-action Star Wars television series, The Mandalorian — from Jon Favreau (The Lion King) — stars Pedro Pascal (Game of Thrones) as a lone gunfighter in the Outer Rim. The series takes place three years after the events in Return of the Jedi: after the fall of the Galactic Empire, but before the rise of the First Order.

And apparently, the very first episode of The Mandalorian “contains a dramatic Star Wars-universe spoiler.”

We don’t exactly know what that means. Is something that we’ve been suspecting all along going to finally be revealed? Will we find out some information that is later expanded upon in The Rise of Skywalker, the final installment in the Skywalker Saga? Or maybe this spoiler will come entirely out of left field and blindside fans everywhere?

We don’t exactly know if this spoiler will be as “dramatic” as it’s reported to be — and we’re not going to find out at all until we get to catch  The Mandalorian kicks off on Disney+ on November 12. But you can bet that we (as well as every other  Star Wars fan who’s eagerly anticipating the launch of Disney’s new streaming service) are definitely excited to learn more.

You can watch the trailer for The Mandalorian below:

Want even more Star Wars? There’s so much coming soon to Disney+, including a Cassian Andor series centered on Diego Luna’s Rogue One character, an Obi-Wan Kenobi series starring Ewan McGregor, and the final 12-episode season of the animated series The Clone Wars.

What do you think the impending spoiler in The Mandalorian will be about? Let us know in the comments!