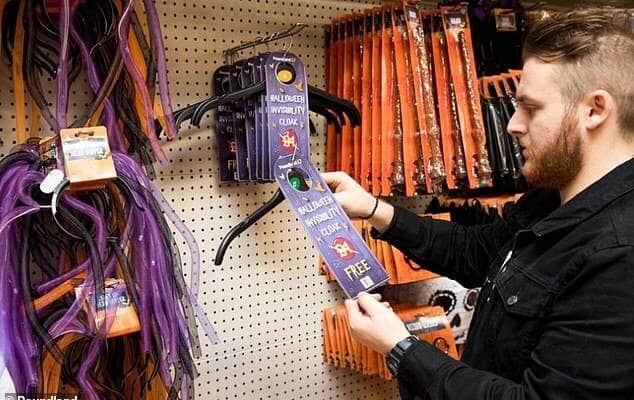 Poundland, a British Variety store in the U.K., has released free “Harry Potter” invisibility cloaks for Halloween and the internet is losing it over the empty hangers shoppers are taking home with them.

This store, which is famous for selling most of its items for a single £1 (including clearance items and major brands), has been lighting up the internet with its newest gag: a simple hanger packaged as a “Halloween Invisibility Cloak.” 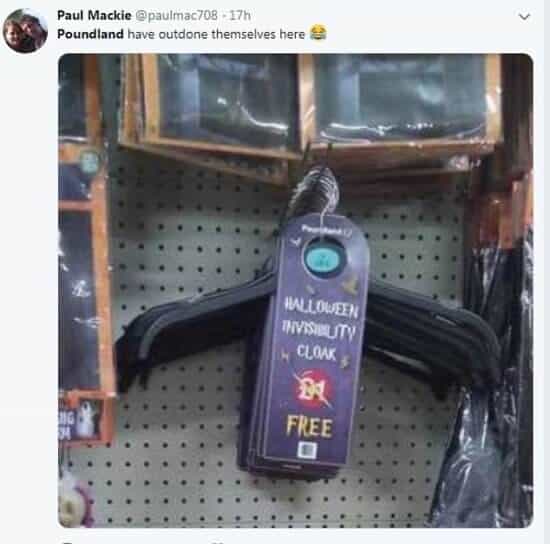 For those not familiar, Invisibility cloaks were first made famous from the “Harry Potter” film and book series. The cloak was first seen on screen in “Harry Potter and the Sorcerer’s Stone,” when it was gifted to Harry as a Christmas gift. In the movie, Harry and his friends utilized the spellbinding piece of outerwear as a method of sneaking around Hogwarts Castle unknowingly by others and now it seems to have become the newest gag by Poundland for the Halloween season.

As funny as this gag gift is, what’s even funnier is what people have been saying about the item on social media. Specifically, on Twitter–where we found some of the most hilarious comments about the free clothes hanger.

@Garyabcdef joked about the quality of his invisibility cloak, saying: “Mine had a rip in it.” @MalTwitastic took to his Twitter account to share his disappointment over Poundland’s lack of variety, writing: “They only do one size.”

A few other comments that had us chuckling included Tevor Adderley (@AdderleyTrevor) and Andy (@BWFCAndyG) who wrote: “Didn’t see that coming,” and “Hope they ask if you want to keep the hanger before they put it in the bag.”

According to DailyMail, Poundland has confirmed that the costumes would be available at six of their stores. In London, Salford, Bristol, Newcastle, Leeds and Birmingham. All of which, offering the gag gift for free.

What are your thoughts on Poundland selling a bare hanger, which they’re calling an “invisibility cloak?” Let us know in the comments below!