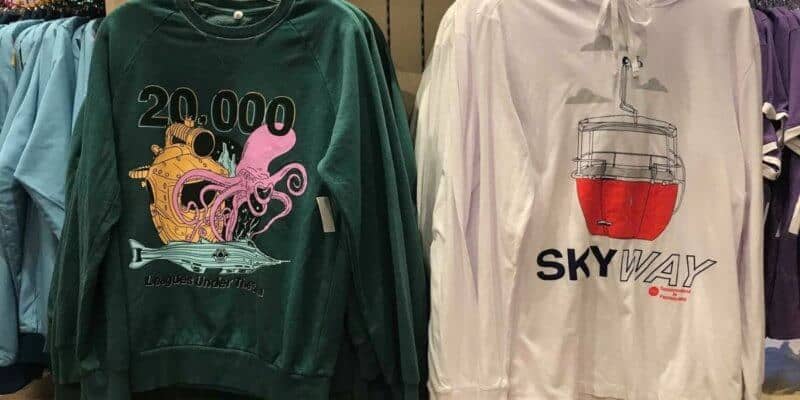 Disney fans love remembering old Disney attractions that are no longer with us. Reminiscing about their favorite memories on those attractions, rewatching POV videos online, and of course, showing off their love with some Disney merchandise.

20,000 Leagues Under the Sea Sweatshirt

As some of you may know, 20,000 Leagues Under the Sea: Submarine Voyage was an attraction at Magic Kingdom in Walt Disney World from 1971 – 1994. Disney guests were able to voyage under the sea in a submarine look-a-like vehicle as they enjoyed the sights and sounds of underwater.

This new piece of Disney merchandise pays tribute to the famous Disney attraction perfectly. The sea foam green crewneck sweatshirt has the classic artwork for 20,000 Leagues Under the Sea right on the front. The Nautilus and the giant squid are the first things our eyes are drawn to thanks to the bright, beautiful colors.

This piece of Disney merchandise was spotted at the World of Disney store in Disneyland and costs $54.99.

This new piece of Disney merchandise features the original Skyway attraction. The white long sleeve shirt, which also has a hood, showcases a red gondola front and center on the shirt, surrounded by some grey clouds in the background.

Planted across the front of you’ll see the word ‘Skyway’ and underneath those bolded letters is the phrase “from Tomorrowland to Fantasyland”.

Which old Disney attraction do you miss most that you hope to see more of on Disney merchandise?