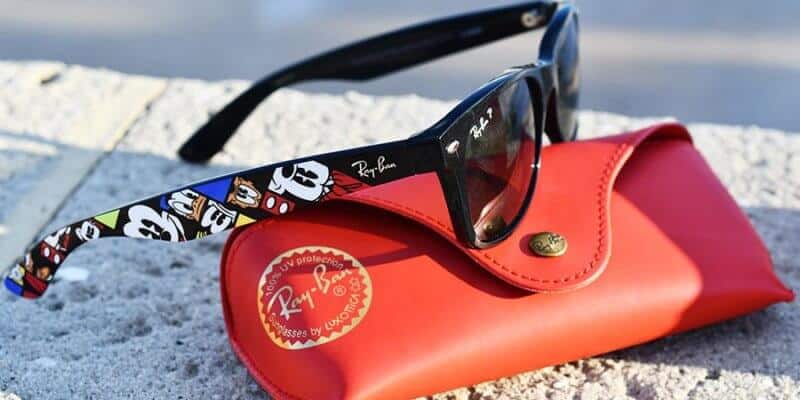 An all-new pair of Disney Ray-Ban sunglasses are making their debut this week — and these ones feature all of our favorite Disney characters of all time!

Sunglass Hut has released other Disney designs in the past, but these have to be our absolute favorite. The latest and greatest Disney Ray-Ban design finally features the Fab Five! Mickey Mouse, Minnie Mouse, Goofy, Donald, and Pluto are featured on the sides of these sunglasses, which have that Wayfarer design that Ray-Ban fans know and love.

The holiday season is quickly approaching, and we think these Disney Ray-Ban sunglasses would make the perfect gift for any fan. They can be worn on those warm, sunny days in the Disney theme parks, from walking around the World Showcase at Epcot to taking a stroll on Pixar Pier in Disney California Adventure. Even though we’re moving away from summer and into the cooler months, we still these Disney Ray-Ban sunglasses would make a fantastic holiday present for the Disney lover in your life since their design is so classic and sunglasses are such a practical item everyone needs in their Disney Parks bag.

These new Disney Ray-Ban sunglasses with the Wayfarer frames featuring the Fab Five are available in both adult and junior sizes, making them versatile for numerous age groups (the young and the young-at-heart, in your Disney crew!). The adult frames feature a polarized lens and have a retail price of $243. The junior frames feature a non-polarized lens and have a retail price of $103. Each pair of sunglasses purchased comes with a bright red case that Mickey Mouse would love, as well as an exclusive authenticity card that has the same Mickey and friends design as the frames.

Remember that starting this Friday when these new Ray-Ban sunglasses make their debut, they will be exclusive to Disneyland and Walt Disney World, so you’ll have to head to the Disney Parks to purchase them.

Want to plan a Disney vacation to get your hands on these Disney Ray-Ban sunglasses and other amazing Disney Parks merchandise (and of course, experience some Disney magic)? Click here for a free, no-obligation vacation quote from Academy Travel to start planning your Disney trip and make your dreams come true!

What do you think of the latest Disney and Ray-Ban sunglasses collaboration? Let us know in the comments!