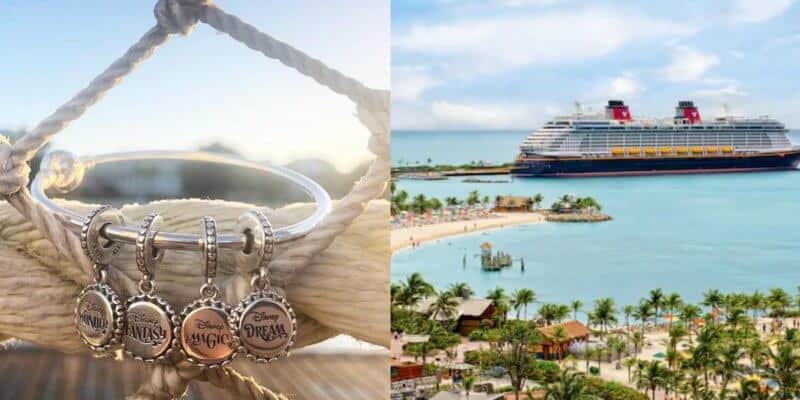 If you are a fan of both Disney Cruise Line and Pandora, then you have to check out these charms!

Disney has partnered with Pandora yet again to bring  fans brand new and exclusive charms that will make a great addition to your current collection.

Over the summer, Pandora released four brand new cruise ship charms which are exclusive for Disney Cruise Line guests. These are a great way to remember and your Disney cruise vacation and bring the magic home with you!

Each of these four charms features sterling silver and the corresponding colored Disney Cruise Line logo, which represent each of the four Disney ships, a first for Pandora. The charms are themed after the Disney Magic, Disney Fantasy, Disney Dream, and Disney Wonder.

These Pandora cruise ship charms are exclusive to Disney Cruise Line guests, therefore they are only available onboard each of the corresponding Disney ships. This means you will have to set sail across each Disney ship in order to collect all four charms.

During D23 2019, Disney Parks revealed they will be releasing a fifth ship as well as a brand new private island. The Disney Wish will be the name of Disney’s fifth ship and it will feature a Beauty and the Beast-inspired atrium as well as the beloved Rapunzel on the stern of the ship, painting the name.

Lighthouse Point of Eleuthera will be the name of Disney’s new private Bahamian island and construction at is expected to begin in 2020. Disney Wish is expected to take delivery towards the end of 2021 with sailings beginning in January 2022.

If you are looking to plan your next family vacation aboard a Disney Cruise and collect these Pandora Disney charms, then don’t hesitate to reach out to our friends at Academy Travel.

Will you be collecting these four new Disney Cruise Line Pandora charms?