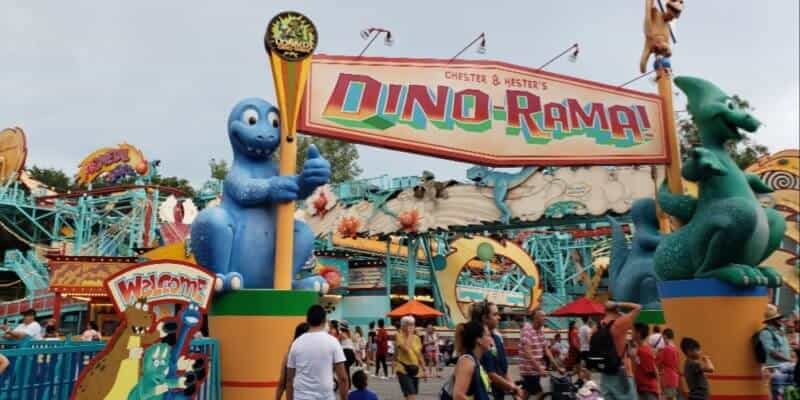 Fans of Disney’s Animal Kingdom and time travel will have something fun to be thankful for this Thanksgiving.

On November 24, the Primeval Whirl attraction at Dinoland U.S.A. will reopen and begin operating again after being closed for many weeks. The attraction will only operate until November 30 and will close again on December 1. Perhaps the attraction will be opening only over the week of Thanksgiving because of a projected increase in crowds.

The family coaster located at Animal Kingdom at Chester and Hester’s roadside carnival called Dino-Rama closed after the summer, and weeks later, Disney announced that the attraction would begin operating seasonally only, though there’s no real clear reason for this move on Disney’s part.

If you’ve never had the experience of enjoying the Primeval Whirl ride, be sure to do so on your next visit, given, of course, the ride is operating at that time.

At the Primeval Whirl roller coaster attraction, Guests board a spinning time machine-like ride vehicle and take a thrilling, spinning, dipping and turning journey back in time to the age of dinosaurs. As you whisk along the track, you’ll see cartoon dinosaurs that seem to know they’ll soon be extinct, thanks to a meteor headed their way.

It’s just one of the many attractions at Dinoland U.S.A. Other experiences in the dino-themed land include the Dinosaur attraction in which Guests can race back in time and attempt to bring an iguanodon back to the present time, Donald’s Dino-Bash, TriceraTop Spin (which is a lot like the Magic Carpets of Aladdin attraction in Adventureland at Magic Kingdom), and the Boneyard where kids of all ages can become paleontologists and archaeologists and unearth dinosaur bones, climb through tunnels, cross bridges, or just take a break for a minute.

Because Primeval Whirl will now only operate seasonally, it’s a good idea to check the calendar on Disney World’s site. Choose the date(s) you plan to be at Animal Kingdom, and the page will tell you whether there are available times that day, which is code for “the attraction will be operating.”

Want to plan an amazingly magical trip to Disney World so you can experience Dinoland U.S.A. too? Academy Travel can help! Visit their site to learn how your dreams can come true too!

What do you think of Disney World operating attractions only seasonally, especially one that is popular like Primeval Whirl? Let us know in the comments section below.