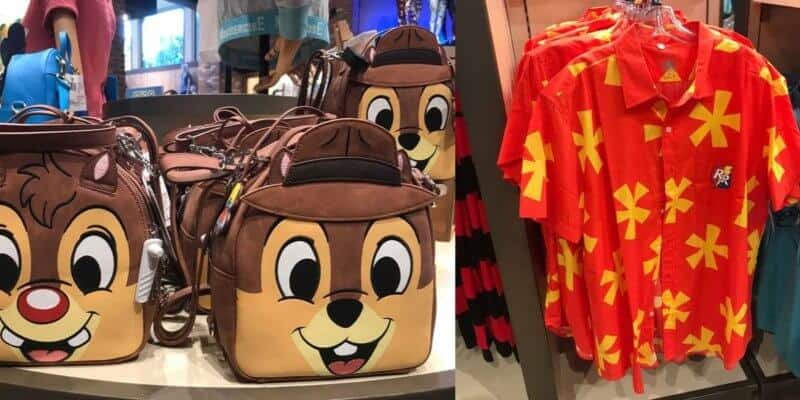 This brand new Chip ‘n Dale Rescue Rangers shirt is totally awesome. The t-shirt features bright colors mixed with a unique pattern brings us right back to the 90s. And if you hadn’t yet noticed, this floral Hawaiian-shirt-style design closely resembles Dale’s shirt from the show!

If you take a closer look you’ll notice the Chip ‘n Dale Rescue Rangers logo on the front pocket. This shirt costs $59.99 and is available at both Disneyland Resort and Walt Disney World Resort.

If you are a fan of both Chip ‘n Dale Rescue Rangers and Loungefly, then add this next piece of merchandise to your ‘must have’ list.

This double-sided Loungefly bag features Chip on one side and Dale on the other, along with his signature hat of course. Both characters have embroidered features as well as ear tabs which stick out, bringing this bag to life!

This Loungefly bag costs $80 and is available at both Disneyland Resort and Walt Disney World Resort.

If you want to visit Walt Disney World or Disneyland and get your hands on this brand new Chip ‘n Dale Rescue Rangers merchandise, then don’t hesitate to contact our friends over at Academy Travel! The Authorized Disney Vacation Planners at Academy Travel will help you and your family plan every aspect of your Disney trip. Click here for your no-obligation vacation quote from Academy Travel.

Were you a fan of Chip ‘n Dale Rescue Rangers? Let us know in the comments.