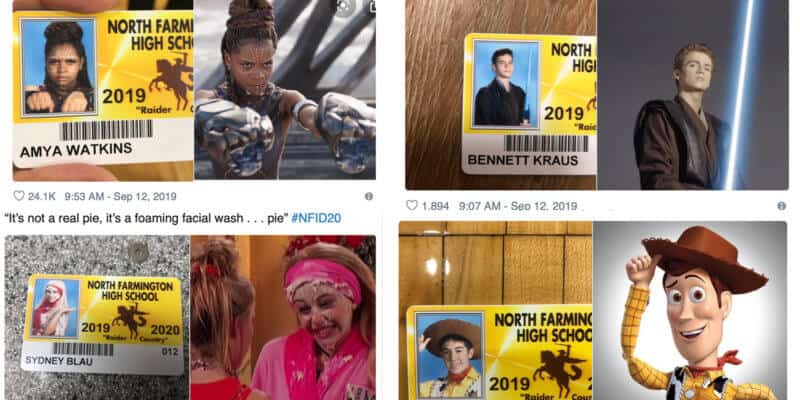 When most people think of cosplay, they think of massive conventions like Comic-Con, MegaCon, E3, and other gatherings that celebrate everything movie, TV, and video game-related. However, now it seems to have become a hilarious tradition at a high school in Farmington Hills, Michigan–and the students who took part in this year’s ID shoot perfectly captured some of our favorite Disney characters!

Shared via a series of tweets on Twitter with the hashtag #NFID20 are an almost endless amount of ID photos of students who took part in this year’s cosplay shoot and we can’t stop scrolling. The students who took part this year mostly went for some of the more popular Disney characters. However, the North Farmington High School student Kiara Asmar went for one of our favorite less popular supporting characters who’s most known for his long but unforgettable name.

Sydney Blau wanted to capture the best of both worlds with her ID photo by recreating one of the sweeter and messier moments from Disney Channel’s “Hannah Montana.”

Bennett Kraus wanted to harness the power of the force with his shoot. The student has the look down perfectly, all the way down to Obi-Wan Kenobi’s single hair braid.

According to IGN, this epic tradition began only a few years ago when students were first given the ability to choose their favorite actor, musician, or meme to dress up as for their ID photo. As part of the fun, students began posting their photo on social media along with an image of the inspiration for their look.

There's no way I'm kissing a frog and eating a bug on the same day!? ?@Disney @elizabethdampie @AnikaNoniRose #NFID20 pic.twitter.com/3ZQdFHFceZ

In addition to these Disney characters, other cosplays include Mr. Krabs from “SpongeBob SquarePants,” Katt Williams, Regina George from “Mean Girls,” Beyonce and many more other famous characters from pop culture.

Here are even more of our favorite Disney cosplays from this year’s shoot:

There’s a snake in my boot @toystory #NFID20 pic.twitter.com/mluF7pMLlC

That’s it, we don’t even have enough money for the Gross Sisters to jack. #NFID20 pic.twitter.com/w3c5qBlo4N

#NFID20 “TinkerBell would nearly die everytime she didn’t get enough attention.” Either that or my Senioritis pic.twitter.com/NEKrGAgBDP

Which of these cosplay ID photos is your favorite? Let us know in the comments!