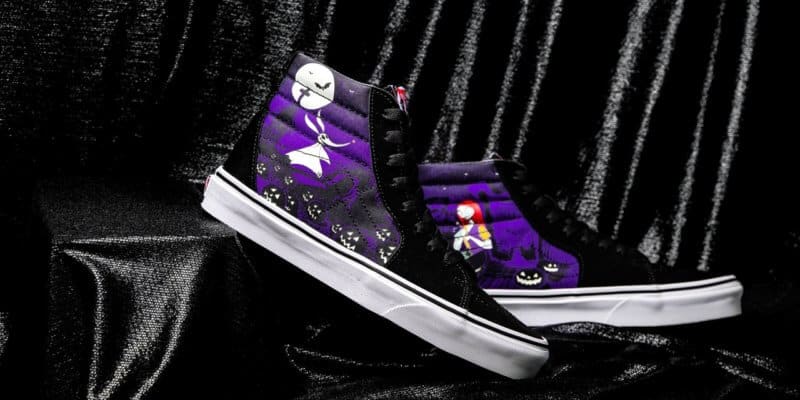 “What’s this?! What’s this?!” Vans announced they are releasing a new sneaker collection inspired by “The Nightmare Before Christmas“!

Here’s a peek at the new designs, courtesy of Vans:

In case you aren’t familiar, Tim Burton’s “The Nightmare Before Christmas” is a musical story that follows Jack Skellington, the Pumpkin King. After masterminding another successful Halloween with all his ghoulish friends in Halloweentown, Jack laments in the empty feeling he feels for his holiday. He ventures deep into the woods where, after falling through a magical doorway, he discovers Christmastown. Jack is captivated by this new holiday, and returns home determined to make Christmas his own. However, as Jack strives to replace and outdo Santa Claus, he rediscovers what it means to be the Pumpkin King.

Jack is joined by an exciting and lovable cast of characters including Sally, a Frankensteinesque girl with a big heart and who yearns for freedom from her mad-scientist creator, Dr. Finkelstein; Zero, Jack’s adorable loyal ghost dog with a bright red nose; and, of course, the infamous Oogie Boogie Man.

The film has developed into a cult classic with a devoted following. In fact, the Haunted Mansion in Disneyland’s New Orleans Square transforms into a “Nightmare”-themed attraction. This lasts from Halloween all the way through Christmas. (There is also talks of a live-action remake/follow up movie in the works.)

There is still no official word on when the collection will be released, but you can stay up to date on news regarding this collection here.

Are you excited for this sneaker collection? What designs are you hoping for? Let us know in the comments!

Comments Off on FIRST LOOK: “Nightmare Before Christmas” collection from Vans!