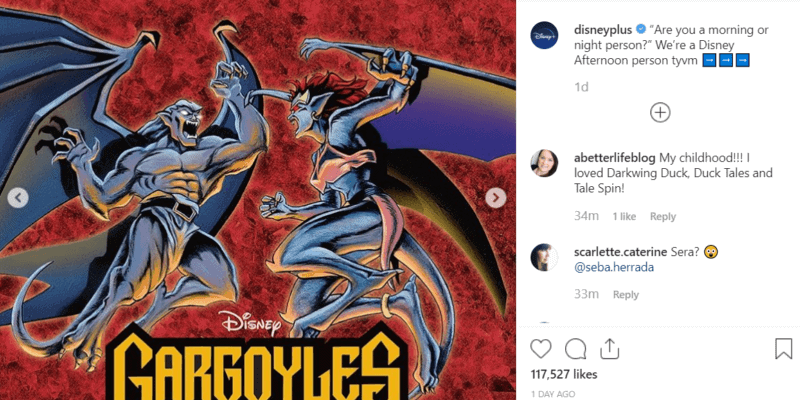 We shared earlier this week that Disney+ will include a lineup of all our favorite Disney Afternoon cartoons from the 90s. But we didn’t mention that the original “Gargoyles” series would be included in that lineup!

If you’re not familiar with the original Disney cartoon, “Gargoyles,” let us catch you up. The show follows nocturnal creatures known as gargoyles who turn to stone during the day and come to life at night to protect New York City. It’s hilarious and has a bit of a darker tone than other Disney Afternoon cartoons, which is what sets it apart.

Disney+ announced on social media that the new streaming service, which launches this fall on November 12, will include some of the Disney Afternoon cartoons that we know, love, and miss terribly. We shared our excitement that “Ducktales,” “Chip ‘n Dale Rescue Rangers,” “Darkwing Duck,” and “TaleSpin” would be available for streaming. But now we’re even more thrilled that not only “Goof Troop” and “Adventures of the Gummi Bears” will be included, but also one of our favorite series, “Gargoyles,” will be on Disney+ too!

Check out Disney’s witty and relatable announcement of the full lineup of Disney Afternoon cartoons coming soon to Disney+ in the Instagram post below:

“Are you a morning or night person?” We’re a Disney Afternoon person tyvm ➡️➡️➡️

While the internet has been blowing up with comments from fans excited to watch their favorite Disney Afternoon cartoons once Disney+ launches this fall, many of us are pretty enthusiastic about the old-school show “Gargoyles” being a part of that lineup. Comicbook even points out that Disney+ launches just a few weeks after the 25th anniversary of “Gargoyles,” and voice actor Keith David even shared how he’d be willing to do a rebooted version of the show in the future.

Disney hasn’t shared how many episodes or seasons of each Disney Afternoon cartoon that will be available for streaming on the platform. But if these cartoons are like the other original Disney shows available on Disney+, we’d assume that all the seasons will be available. We’ll keep you posted if Disney shares more information.

Are you excited about the original “Gargoyles” series and all the other Disney Afternoon cartoons that will be viewable on Disney+? Let us know in the comments!