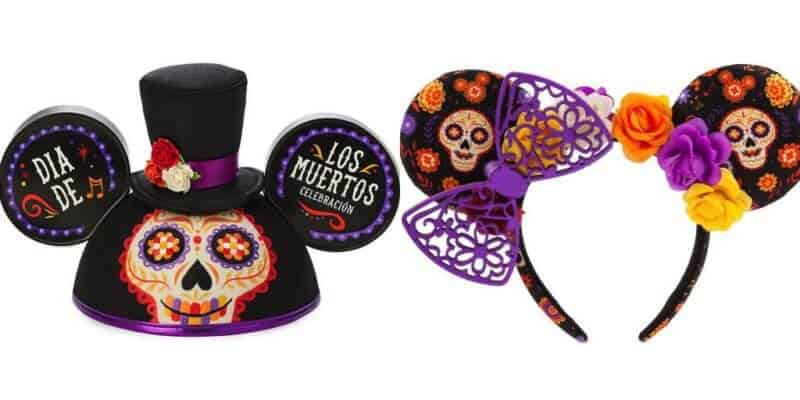 September 15 marked the beginning of the celebration of Hispanic Heritage Month, and Disney is kicking off the celebration with the release of new Dia de los Muertos merchandise inspired by Disney’s “Coco,” available at Walt Disney World and Disneyland.

These vibrantly colored ears feature a floral pattern complete with sugar skulls and Mickey heads, as well as colorful little flowers across the headband. The accent on the headband is a deep-purple-colored die cut bow affixed to the band on the right side. This ear headband is the perfect accessory to wear in the parks in celebration of Dia de los Muertos. Que adorable!

Next up is this muy guapo ear hat, also inspired by the Dia de los Muertos celebration. The front of the hat features a large sugar skull with intricate embroidery. We love the top hat with the colorful felt roses and the purple satin around the hat. The ears read “DIA DE” and “LOS MUERTOS Celebracion.” If she got the ear headband, you’ve got to get these ears. Hey, at least it’s not matching t-shirts!

Speaking of T-shirts, we are in love with the distressed screen art on these Dia de los Muertos shirts. We love the calavera (skull), the flowers and the musical notes that decorate the t-shirt. But we really love that the shirt is 100% cotton, making it super comfy to wear in the parks! Pick your park–Disney World or Disneyland; the shirts are available at both parks, and the shirts have either “Walt Disney World” or “Disneyland Resort” printed under the artwork.

The Dia de los Muertos Celebration is the backbone of Disney/Pixar’s “Coco.” It’s a great movie to watch to get you into the spirit of Dia de Los Muertos, or Day of the Dead, on November 1 and Hispanic Heritage Month, which is celebrated from September 15 through October 15.