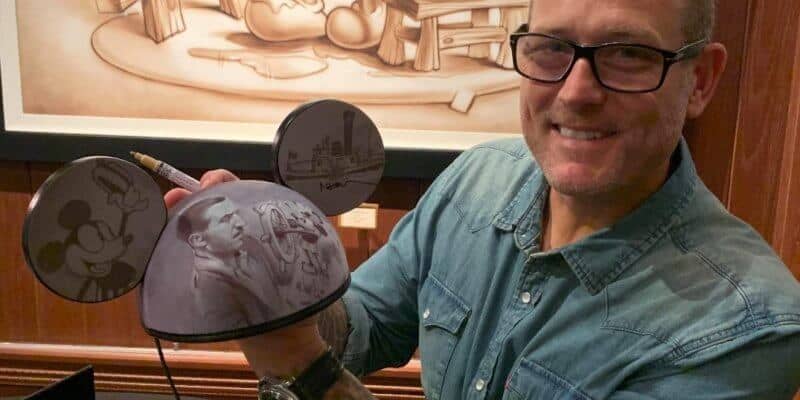 Photo Credit: Inside the Magic

Hang on to your hats, everybody—your ear hats, that is.

Disney has just released a brand-new Walt and Steamboat Willie-inspired ear hat by artist Noah, and these are some of the most magical ears we’ve seen!

The newest addition to the ear hat family is part of the Disney Parks Designer Collection. The cap of the ear hat features Walt in his early years–the dark-headed, debonair Disney sports his trademark mustache. Next to Walt is his first famous version of the Main Mouse–Steamboat Willie. The back of the hat is decorated with Walt’s famous words about his empire:  “It was all started by a mouse.”

The talent behind the newest Designer Collection ears is California native Noah Elias, known simply as “Noah.” We were lucky enough to catch up with this fascinating artist today at Disneyana on Main Street U. S. A. at Disneyland Park, and the ears are even more impressive in person!

At the young age of 16, Noah felt a calling to use his artistic talent and creativity to impact those around him. He began by working 40 to 60 hours a week–creating signage, developing branding and designing packaging for small businesses that enabled them to share their stories. Years of that fast-paced work left Noah with a desire to tell his own stories through his artwork.

It wouldn’t be long before this gifted artist would create his own publishing company that produced posters, limited edition artwork and other licensed goods. His work caught the eye of companies like Universal Pictures, Toyota and of course, the Walt Disney Company.

But years of success as a business owner wasn’t quenching the thirst Noah had to really get out there and change the world. Today, Noah is still creating breathtaking artwork. He is one of Disney’s fine artists, and he’s even been an exciting part of Epcot’s Festival of the Arts. Today, he is answering the calling on his life by working with other artistic and talented entrepreneurs to help them reach for the stars–and catch them!