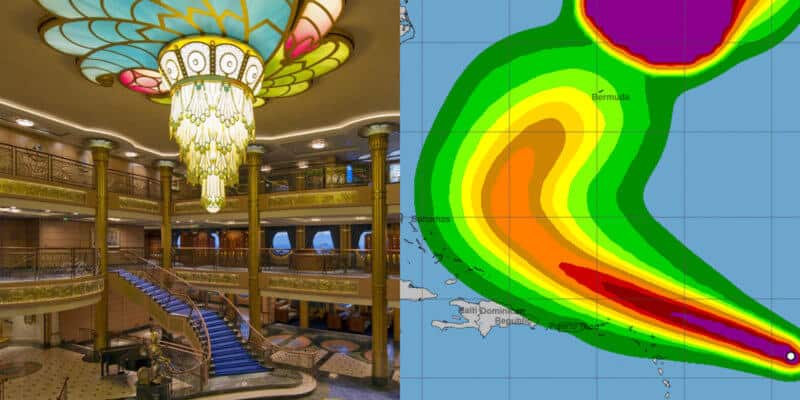 Disney Cruise Line’s Fantasy ship has officially decided to alter its itinerary due to Hurricane Jerry’s forecasted track and possible impact to the Eastern Caribbean.

In a new tropical weather advisory from Disney Cruise Line, the company revealed that the Disney Fantasy’s itinerary for sailing this weekend for September 21 has been altered and the ship will now be setting sail to the Western Caribbean instead of the Eastern. In the advisory, DCL reports that, “Instead of visiting Tortola and St. Thomas, the ship will now visit Cozumel, Mexico, on Monday, George Town, Grand Cayman on Tuesday and Falmouth, Jamaica on Wednesday and Castaway Cay on Friday.”

In the update, DCL continues by saying: “The safety and well-being of our guests and crew members is our highest priority. We appreciate our Guests’ understanding regarding this necessary itinerary change.” The update comes this morning following new updates on the direction of the hurricane, which has been reported to be staying far off the East Coast and Florida but to come close to the tropical vacation destinations of Tortola and St. Thomas.

Jerry was originally a tropical storm until it was upgraded to a Category 1 hurricane Thursday morning when the National Hurricane Center reported that the storm’s winds increased to 75 mph. Currently, the storm is moving northwest at 16 mph and is expected to be near the north of the northern Leeward Islands by Friday with it passing north of Puerto Rico by Saturday.

“Jerry is forecast to strengthen during the next day before some weakening begins this weekend,” said the National Hurricane Center. “The statistical-dynamical intensity models show some moderate northwesterly shear impinging on the northern half of the cyclone, which should arrest the early period intensification.”

The last time we saw major changes to the Disney Cruise Line’s itineraries was only a few weeks ago during Hurricane Dorian.