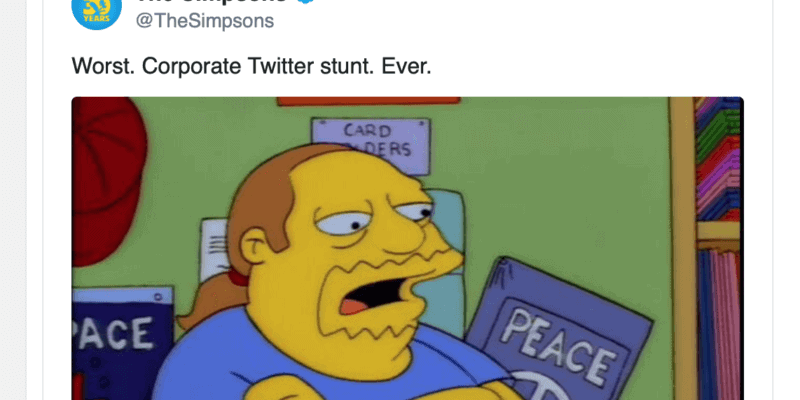 Yesterday, all of Disney’s many Twitter accounts associated with their many entertainment companies teamed up for an epic introduction to the official Disney+ Twitter account. However, the Simpsons’ Twitter account wasn’t as keen about the welcome and shared their own thoughts on Disney’s publicity stunt.

Disney+, the all-new streaming service for The Walt Disney Company, is only a few months away from premiering, which prompted Disney to create a Twitter account for the upcoming service. In an attempt to bring publicity to the account, the official Disney Twitter started a series of tweets that spawned between The Walt Disney Company’s several entertainment companies. These included Pixar, National Geographic, Marvel, The Avengers, Star Wars, and Guardians of the Galaxy. All of which, came together for the epic Twitter feed below.

It’s moving day! Is everyone packed and ready to go to @DisneyPlus? pic.twitter.com/bAFxRjT5aY

Maybe we can help! Have you tried looking in shallow, tropical reefs of the Indo-Pacific? That’s where you’ll find paracanthurus hepatus. Just don’t get confused with acanthurus leucosternon or acanthurus coeruleus – they all are known as blue tangs! pic.twitter.com/Mq1BKGBxy0

Hang tight. We have quite a few suits here. pic.twitter.com/5jGryAPItk

Looks like you’re in need of some transport, you scruffy-looking nerf herders. Welcome aboard the Millennium Falcon, @Marvel! Any more crew expected? pic.twitter.com/VPF1aSICXg

Don’t worry, she may not look like much, but she’s got it where it counts, kid. Prepare to make the jump to lightspeed! pic.twitter.com/iovNCVcy3o

However, after all of these many Tweets went live–shortly after the official Simpsons Twitter account decided to chime in. And let’s just say they their response wasn’t the most welcoming.

In their reply, the account writes: “Worst. Corporate Twitter stunt. Ever.” Of course, this show is now owed by Disney after the merger of 20th Century Fox and The Walt Disney Company. As to whether or not this was a simple prank or all part of the fun is unknown. Although, you have to admit it is quite funny regardless.

We can’t imagine a company as big and powerful as Disney would let one of its own properties rebel in such an extreme rebuttal. However, The Simpsons have been known to dance to the beat of their own drum.

Regardless of The Simpsons’ feelings, this act by Disney has been quite successful. As of today, the Disney+ official Twitter account now has over 84-thousands followers. And this was all just in time for the new company’s reveal of more pricing and launch deals for when the service goes live later this year.

Do you think The Simpsons’ reply was all part of the stunt? Let us know in the comments below!