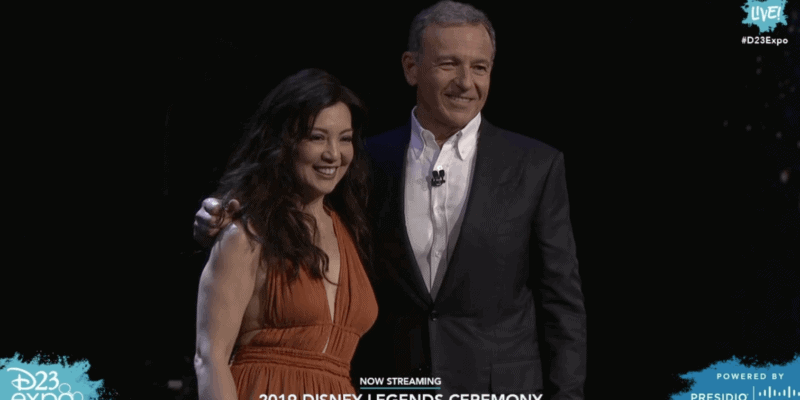 During her acceptance speech, for the Disney Legends ceremony at D23 Ming-Na Wen mentioned that she would be joining the great cast of upcoming Disney+ Star Wars show, The Mandalorian!

During her acceptance speech, she mentioned how glad she was that Disney kept acquiring major properties as it meant she could hit every item on her bucket list.

She went onto say:

I used to pray to God, Buddha and the Force when I was a little girl. It’s astounding to me, Disney has offered me so much more.

It’s safe to say that Ming-Na Wen has had quite the career with Disney over the years, lending her voice to Disney Princess Mulan back in 1998 and starring as Agent Melinda May in the long-running Marvel’s Agents of SHIELD. On top of these big projects, Ming-Na Wen has also lent her voice to “Phineas and Ferb,” “House of Mouse,” and “Sofia the First.” The fact that she now gets to be part of the Star Wars Universe is pretty incredible.

We don’t know the full details on exactly who she is playing in The Mandalorian just yet but with the Disney+ panel kicking off a little later today, we may get a glimpse of her character in the highly anticipated trailer that we’ve been promised!

Disney already reckons they have a hit on their hands (and we don’t doubt it) with Jon Favreau confirming that he is already working on scripts for season two!

Are you excited to see Min-Na Wen join an already amazing cast in The Mandalorian? Hit us up in the comments below!