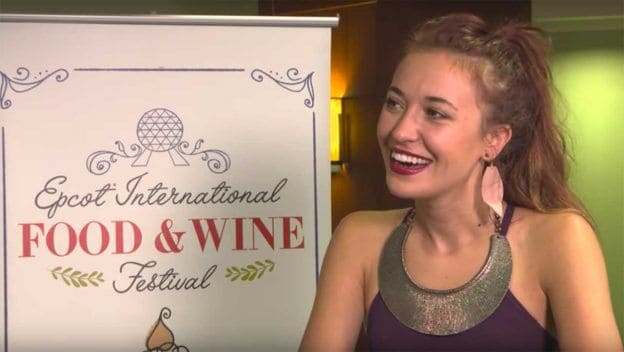 Contemporary Christian music singer and songwriter Lauren Daigle has been added to the already impressive line-up of musicians and bands to perform at the “Eat to the Beat” Concert Series at Epcot’s 2019 International Food & Wine Festival. Daigle is slated to perform September 9 and 10 at 5:30 p.m., 6:45 p.m., and 8:00 p.m.

Daigle first made her debut in 2013 and has grown in popularity ever since. The Lafayette, LA native has won two Grammys this year alonehe, and the coveted gramaphones are in good company at Daigle’s home, joining her American Music Award, multiple Billboard Music Awards, and three GMA Dove Awards. Her latest record, “Look Up Child,” debuted in the #3 spot on Billboard’s Top 100 list.

Daigle says she’s most excited about enjoying one of her hobbies during the festival: eating! And with more than 30 food booths at the Festival’s Global Marketplace this year, she’ll be in just the right place for it! Take a look at her in this video clip below:

Epcot’s 24th Annual International Food & Wine Festival starts August 29, which is the same day Galaxy’s Edge opens at Disney’s Hollywood Studios. The event runs through November 23, making it the longest-running Festival since its beginning in 1995.

The 2019 “Eat to the Beat” Concert Series begins the evening of August 29 and continues through November 19. This year’s series will include almost 250 performances. For even more excitement, Guests can book an “Eat to the Beat” Dining Package and enjoy a meal at one of more than 15 Epcot table-service restaurants including Biergarten, Teppan Edo, Via Napoli, Coral Reef Restaurant, La Hacienda de San Angel, and more. In the evening, Guests who purchased a dining package will receive V.I.P. seating at the America Gardens concert area where they’ll enjoy stellar performances by musicians on the series line-up. To make your reservation, call (407) WDW-FEST.

If you’re interested in booking a trip to visit Epcot during Food & Wine this year, reach out to Academy Travel, Authorized Disney Vacation Planners who can make planning a vacation simple, and they can even help with reservations for the Eat to the Beat Dining Packages. Click here for a free quote!

Are you planning to attend the concerts during this year’s Food and Wine Festival? Which performer is your favorite?