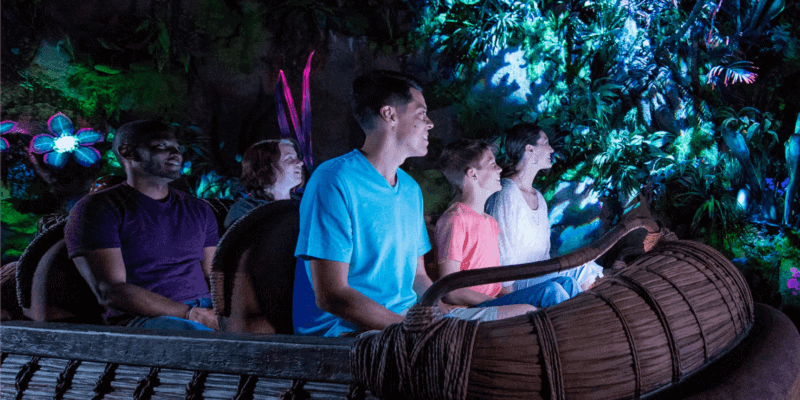 Over the weekend, many took to Twitter to find out some never-before-revealed information regarding Pandora – The World of Avatar at Disney’s Animal Kingdom.

Walt Disney’s Imagineering’s Executive Director Joe Rohde decided to Tweet out a few unanswered questions from Disney fans, some of which were specifically directed toward the lack of wheelchair-accessible boats on Na’vi River Journey, a popular attraction for Guests of all ages.

Guests in wheelchairs or ECVs wanting to ride this attraction may transfer to the attraction’s boats, but unfortunately they cannot take their wheelchairs or EVCs onboard (unlike the experience on it’s a small world located in Magic Kingdom). This left a lot of guests wondering why Disney Imagineers decided to stick with this design on such a new attraction.

Rohde explained in a recent Tweet that the positioning of Na’vi River Journey and the spacial opportunity created by Flight of Passage prohibits the possibility of wider boats. He didn’t go into further detail, but here’s what he said:

Well..sort of. The ride exists in its present form because of a spatial opportunity created by the queue of Flight of Passage. https://t.co/rmMM18nYRH

This wasn’t the only topic Rohde responded to on Twitter. He also acknowledged the decision of calling the creatures on Flight of Passage “banshee” rather than “Ikran” when referring to their Na’vi name.

Rohde, along with the other Disney Imagineers and the filmmakers, contemplated these options and had a fair amount of discussion before coming to the agreement of referring the natives as “banshee.”

That is a thoughtful comment. There was actually a fair amount of discussion about this. But between us and the filmmakers we decided to use the more familiar word banshee, and acknowledge the actual name Ikran. https://t.co/0wbz03Zj9K

This decision came as “banshee” is more popular and recognizable compared to “Ikran.” Disney Imagineers and filmmakers still wanted to acknowledge and respect the natives, which is why during Flight of Passage, you will hear a quick explanation of “Ikran” although throughout a majority of the ride, you will hear the creatures called “banshee.”

Still, even two years after Pandora – The World of Avatar opened on May 27, 2017 in Disney’s Animal Kingdom, the land and its attractions remain to be just as popular as ever. If you want to experience the Na’vi River Journey or Flight of Passage, make sure you book your FastPasses ahead of time.

What do you think of Joe Rohde’s explanations for the attractions in Pandora? Let us know in the comments!