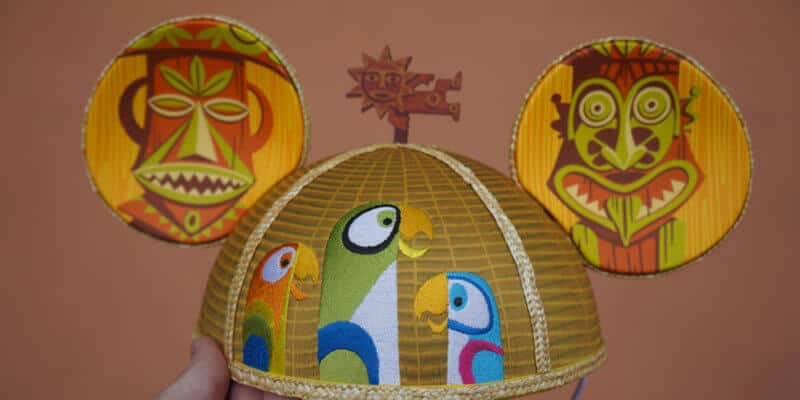 In May, the Disney Parks announced the limited-release of Disney Parks Designer Collection mouse ears designed by celebrities, artists, and designers coming to the parks and shopDisney. Recently, ITM was sent the Walt Disney’s Enchanted Tiki Room-themed ear hat from the collection and after an up-close look, it’s safe to say these imaginative ears perfectly combine two of Disney’s most treasured elements–the beloved Enchanted Tiki Room attraction and the original Mickey Mouse accessory.

For those of you who are already grabbing your keys to head out to the parks to grab these ears, they don’t officially launch until later this summer. The ears were designed by the famed artist SHAG, who drew from one of Walt Disney World’s and Disneyland’s most treasured attractions when creating the accessory.

From only a quick glance, any Disney fan can easily identify the theming of the hat as the headwear’s many themed images perfectly capture the essence of the Adventureland show.

Starting with what stands out the most–the ears. Both ears are two-sided, offering different designs on both the front and the back of each. And what better to be featured on the ears than that of Tikis? Each with its own unique expression and facial characteristics.

Moving down to the hat, both the front and back feature a different but equally important design element. The front of the hat features the image seen below, three of the singing exotic birds featured in the show. On the back, the hat offers a Tiki-inspired Mickey Mouse wearing a lei. To add a little extra magic and fun to the design, the Mickey is animated to be waving goodbye with the accompanied text of “See you in the Tiki Room” stitched next to it.

Located on the top center of the hat is an adorable little Tiki god perched up by a small piece of wood. The god features the same design on both the front and the back of the hat, making him visible from almost any direction.

The lining of the hat features a decorative trim that runs all along the hat and ears and most resembles that of a straw basket–giving the ear hat even more cool and tropical vibes. This sits on top of the lining, a Tiki-inspired pattern that features the tropical color scheme of tan, green, and yellow.

And of course, no piece of art is complete without the artist’s signature. Located on the interior of the hat, you can find the hat’s tag, which features SHAG’s logo/signature.

To get your own version of these enchanting ears, be sure to head out to the Walt Disney World and Disneyland parks on August 26, when the hat officially launches. And if you can’t make it out to the parks, the hat will also be coming to shopDisney the same day!

What are your thoughts on Walt Disney’s Enchanted Tiki Room-themed ear hat? Let us know in the comments below!

This hat was sent complimentary to ITM from Disney Parks Experiences & Products.