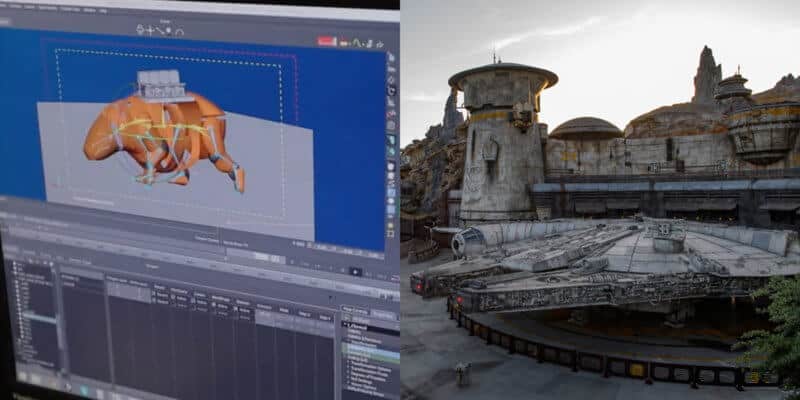 Star Wars: Galaxy’s Edge is finally at Disneyland and in its previews at Walt Disney World. And as guests are discovering and experiencing the new land, Walt Disney Imagineering has revealed a discarded attraction from the project in a new video series from the company. From the looks of this video, it seems fans will now never know what it’s like to ride on a Dewback.

Recently, Walt Disney Imagineering teamed up with Khan Academy to create a new video series in an effort to educate and inspire Disney fans with a peek inside the Imagineering process. The new series includes many different videos, and all of them offer viewers the ability to learn new concepts and what it takes to design theme parks.

In a video in the series titled: “Welcome to Imagineering In a Box,” the video discusses what it’s like to be an Imagineer and includes B-roll of some of the projects the imaginative team gets to work on. In one of the clips in the sequence, we see computer software of an animation of what appears to be a Dewback.

For those not familiar, Dewbacks are thick-skinned reptiles native to the desert planet of Tatooine and were first seen on screen in “Star Wars: A New Hope” as an animatronic creation. Well, it seems this wasn’t going to be the only place these reptiles were to appear. In the next shot of the video, we see one of the Imagineers riding on the back of what looks to have been a virtual experience that would have allowed guests to ride on the thick-skinned creatures.

As of yet, no announcements had been made of this experience. And as the themed lands are now fully complete on both coasts, the idea of this attraction ever seeing the inside of a Disney Park is very unlikely–which makes us believe this is a scrapped attraction.

However, how exciting would it have been to be able to ride on the back of one of these creatures, even if it was only digitally? To see the footage, be sure to skip to the 3:05 mark of the video above.

What are your thoughts on this scrapped project? Let us know in the comments below!