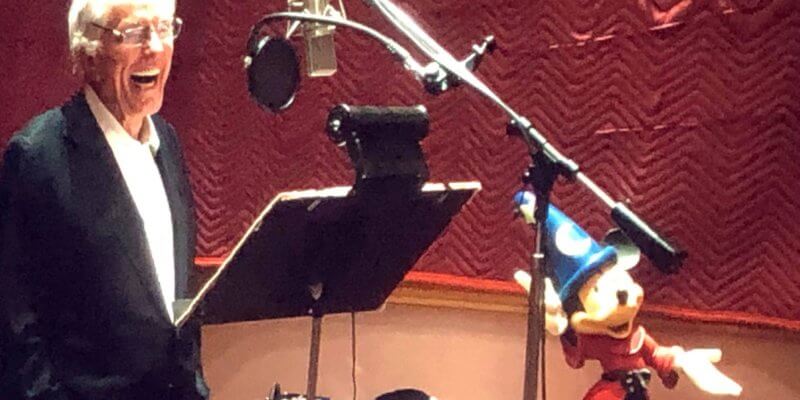 Step in time, step in time, everybody let’s step in time!
Disney fans have been expecting big news for Epcot for quite some time now, but I think it’s safe to say that guests got more than they were anticipating during Sunday’s Disney Parks, Experiences and Products panel at the D23 Expo.
The Epcot segment started off with Bob Chapek, Chairman of Parks, Experiences and Products, and Zach Riddley of Walt Disney Imagineering announcing several big projects coming to Epcot, but they were soon joined on stage by someone very special.
The one and only, Dick Van Dyke walked out on stage, and of course, he received a roar of applause and a standing ovation. The 94-year-old actor was introduced after a group of dancers performed the “Mary Poppins” classic song, ‘Step in Time’.
Van Dyke shared a very emotional, yet touching memory with the crowd. “What made it was Uncle Walt,” Dick Van Dyke stated. “Walt was a creative genius who look at the world through a child’s eyes. He’d come on the set every day and try to bring out the child in all of us.”

They brought out Dick Van Dyke to announce the first ever Mary Poppins attraction at Epcot ????? pic.twitter.com/eUVgYEKwI1

Walt encouraged him to embody child-like wonder in his famous “Mary Poppins” performance several years ago. “That’s the magic and I’d do it all over again right now,” Van Dyke continued.
Bringing tears to everyone eyes, the audience continued to cheer on Mr. Van Dyke, but of course, everyone was still wondering why this Disney Legend was on stage.
Disney fans soon came to learn that Dick Van Dyke was at D23 to help reveal that the first-ever “Mary Poppins” inspired attraction was coming to the United Kingdom pavilion.

We understand you most likely now have the urge to visit Epcot so you and your family can experience the new “Mary Poppins” attraction as well as everything new to the parks! That’s why our dear friends at Academy Travel and Mickey Vacations have partnered with Inside the Magic so that we can offer the sweepstakes of a lifetime! You can enter to win an amazing weeklong trip to Walt Disney World for a family of 4.

Will you be visiting Epcot to experience the all-new “Mary Poppins” attraction?