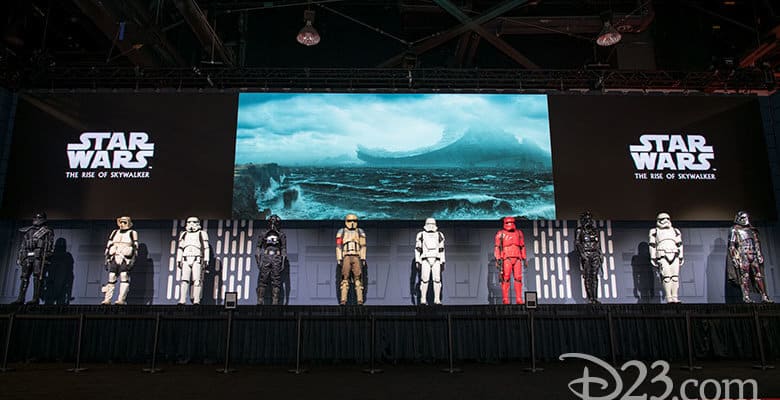 Whether it’s the silent patrol of a Stormtrooper duo or the March of the First Order with Captain Phasma at the helm, there’s just something about a Stormtrooper that simultaneously fascinates, horrifies and intrigues us. Is it the darkness over their eyes? The eerie helmet? The full body armor?

Guests at the 2019 D23 Expo at the Anaheim Convention Center today can decide as they are getting an amazing look at the differences in the Stormtrooper’s armor across the Star Wars universe, spanning more than 40 years.

Imperial soldiers from nine of the Star Wars saga films plus “Rogue One: A Star Wars Story” are positioned on a stage above the floor, commanding reverence from onlookers near and far.

A huge video screen is positioned just behind the Stormtroopers on which interviews with J. J. Abrams, Kathleen Kennedy and other “Star Wars” creators are being projected. The creators discuss the evolution of the Imperial soldier armor and also give insight into the thoughts behind the designs.

The Scout Trooper armor was designed by Aggie Guerard Dodgers and Nilo Rodis-Jamero. You’ll remember them best from the Ewoks scene during the Battle of Endor in “Star Wars: Return of the Jedi.” In this scene, the scout troopers ride speeder bikes. The armor for this soldier was created for quick and easy movements, which made it perfect for reconnaissance and infiltration in the heavily wooded Endor.

Shoretroopers wore armor with a yellowish hue to it. The armor was designed by Glyn Dillon and David Crossman. The color of the Shoretroopers’ armor made a sharp contrast against the blue hues of the ocean planet Scarif in “Rogue One: A Star Wars Story.”

Captain Phasma wore armor designed by Michael Kaplan. Her chromium armor was created just for Captain Phasma, the commander of the First Order’s stormtroopers. “Star Wars” fans of all ages instantly fell head over boots for Captain Phasma, played by Gwendoline Christie. The shiny armor seemed to make her even more imposing.

The Sith Trooper is perhaps the most elusive Imperial soldier yet. That’s because the red armor-clad soldier makes its debut in the upcoming ninth and final film in the Skywalker saga: “Star Wars: Rise of Skywalker,” directed by J. J. Abrams. These troopers wear red armor, and we can only wonder what the significance of that color is.

Which suit of armor do you like best on the Stormtroopers? We’re liking the red–what do you think? Let us know in the comments below!