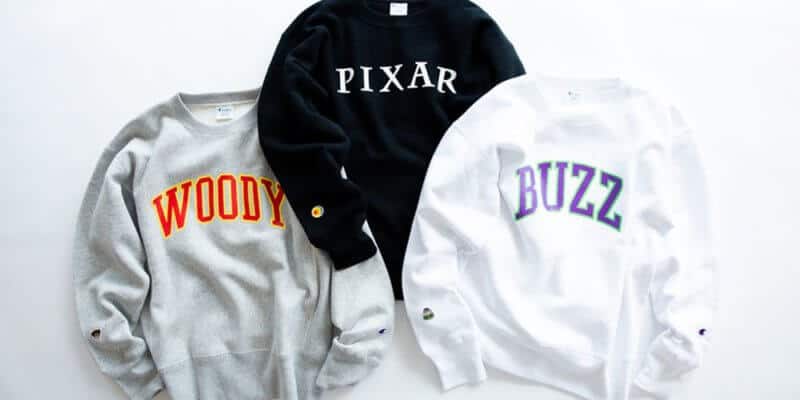 This brand new collection features six pieces, three from Champion as classic reverse weave sweatshirts and three from BEAMS in the form of adorable T-shirts that we’re obsessed with.

The sweatshirts (pictured above) offer a classic athletic look in the bold colors of grey, black and white. The pieces feature the words “WOODY” and “BUZZ” in the style of a collegiate font with the names outlined in hues themed after the characters’ main color schemes from the beloved films. The line also includes a “PIXAR” logo as well but is only available at BEAMS Roppongi Hills store.

All three items will come with a stitched Champion “C” emblem on the left sleeve with Woody, Buzz, and the Pixar ball Luxo on the right.

The BEAMS and Nagaba part of the collection features a fun illustration of Woody and Buzz in the artist’s distinct style in front of backdrops of orange, black, and white. The image shows Woody Standing next to Buzz while holding his two fingers up behind the space ranger’s head in the form of bunny ears.

If you’re looking for other “Toy Story”-themed merchandise, be sure to check out Reebok’s latest iteration of the Instapump Fury model, which were designed in the colors of two of the most beloved toys from Andy’s toy box: Buzz Lightyear and Woody.

Each sneaker comes in mismatching colors for each foot. The left side is designed in colors of purple and green, to reference Buzz Lightyear, and the right side features the palettes of yellow, white, blue denim and cowhide, to reference Woody.

For even more information about these new Reebok kicks, be sure to check out our previous coverage.

Will you be purchasing any of these “Toy Story” items from Champion and BEAMS? Let us know in the comments below!