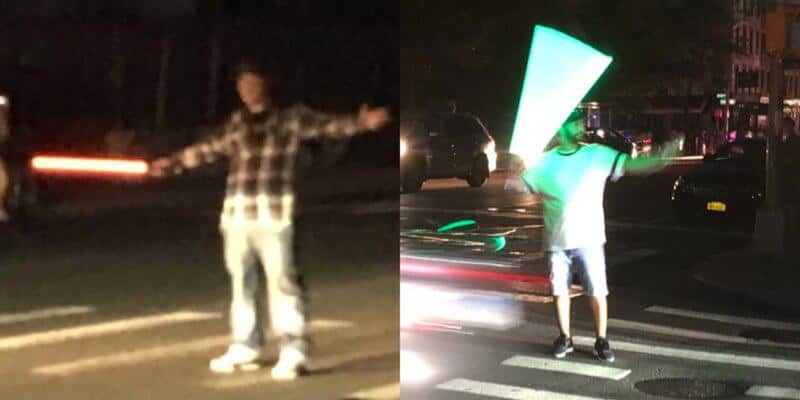 On Saturday night, New York City’s West Side of Manhattan suffered a power failure, causing traffic lights to cease operations. However, “Star Wars” fans were able to come to the rescue by wielding around their lightsabers to direct traffic!

Yes–you read that right, good Samaritans (who may also possess the power of the force) took to New York City streets to aid in directing traffic with the use of their very own lightsabers. New York Times reporter Liam Stack shared an image of one of the Jedis in action in the tweet below.

Now that it’s getting dark the civilians directing traffic in Hell’s Kitchen are using whatever light they can get, including cellphones and… light sabers #NYCblackout pic.twitter.com/R4eEb7yXJa

And this lone Jedi wasn’t solo as he was joined by another man who also took to the street to direct traffic with his own lightsaber as well. It seems that even though one of these men were a part of the dark side, they decided to look past their differences and join forces to help their fellow New Yorkers anyway.

This Good Samaritan was doing in in style with a lightsaber! #nycblackout2019 pic.twitter.com/ZJTZT6R65C

In addition to lightsabers, other citizens utilized cell phones and their hands to help drivers continue their commutes through the busy city streets.

This guy is directing traffic with a legit lightsaber pic.twitter.com/Ewab6lRq9O

The power outage lasted for approximately three hours due to a mechanical problem brought on by an explosion and fire, according to Gov. Andrew Cuomo. The explosion took place at a substation, which led to issues in six power sectors that caused the power outage in portions of Manhattan.

No thanks to the force, the power did later come back on that same night around 10 p.m. “Power has been restored after today’s #blackout, but New Yorkers should continue to exercise caution as everything returns to normal,” Cuomo tweeted. “When things are at their worst, New Yorkers are at their best, and they were at their best tonight.”

Parts of Midtown and Hell’s kitchen were also affected by the blackout, which left some trapped in elevators waiting for the power to return. If only these good Samaritans actually had the powers of the force, they could have utilized their supernatural ability to set them free!

What are your thoughts of these good Samaritans helping direct traffic with their very own lightsabers? Let us know in the comments below!