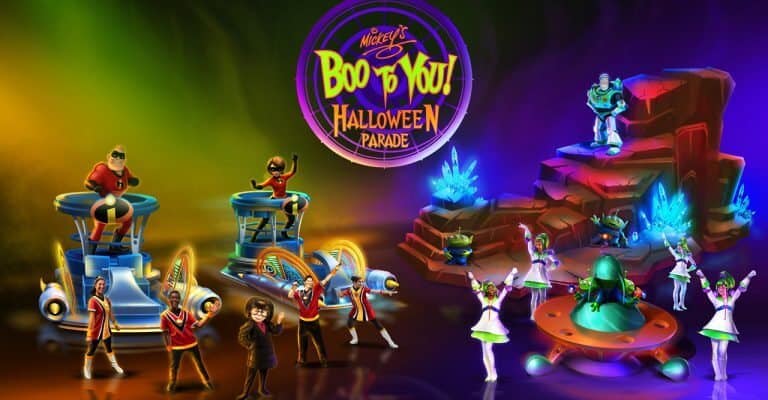 Disney has so much magical mischief up their sleeves this Halloween season! We already shared the details of an all-new fireworks show hosted by Jack Skellington coming this year to Mickey’s Not-So-Scary Halloween Party. Now, we’ve got to tell you about the new floats joining Mickey’s Boo to You Halloween Parade, including The Incredibles and Buzz Lightyear!

Disney just announced that characters from two of your favorite Pixar films are joining Mickey’s Boo to You Halloween Parade this year at Mickey’s Not-So-Scary Halloween Party. According to the announcement, characters from The Incredibles will arrive in the parade as part of an all-new Tomorrowland unit, which by the looks of the concept art looks like will include two individual floats for Mr. Incredible and Mr. Incredible. Edna Mode (the iconic fashion designer we wish could help us with our own wardrobes) and other dancers will accompany the super hero duo. Also joining the Tomorrowland unit this year is Buzz Lightyear, who gets his own space ranger float that looks like it’s from another planet. He will be accompanied by the adorable Little Green Men and some other fun dancers. We’re just wondering where their parents, Mr. and Mrs. Potato Head, are!

The Incredibles, Buzz Lightyear, and their friends are the perfect additions to Mickey’s Boo to You Halloween Parade, which runs twice every night of Mickey’s Not-So-Scary Halloween Party. This year’s parade will include Mickey and Minnie dressed in all-new Halloween costumes and a Haunted Mansion cavalcade including Hitchhiking Ghosts and the spectral Bride, who makes her debut this year. Guests can also see Wreck-It Ralph, Vanellope von Schweetz and the girls from Sugar Rush, Pirates who sail in from Adventureland, Clarabelle Cow who hosts a square dance during a Frontierland hoedown, and a wicked assortment of Disney Villains for the parade’s finale. Although this year’s parade has some awesome new additions, you can check out our video of last year’s parade to give you an idea of what to expect:

There are so many new and exciting offerings added to Mickey’s Not-So-Scary Halloween Party this year, from an enhanced parade to an all-new fireworks show and even a dining party hosted by Cruella DeVil. The event runs on select nights from August 16 through November 1, so if you’re never been to the event, this is a great year to attend. And if you’ve already been multiple times, this year’s party could feel like a whole new world of frightful fun for everyone. We suggest going either way!

Want to plan a Walt Disney World trip so you can attend Mickey’s Not-So-Scary Halloween Party? Contact our go-to Authorized Disney Vacation Planners at Academy Travel, who can plan every detail of your vacation so you can relax and enjoy the Most Magical Place on Earth without any worries or stress. Click here for a no obligation vacation quote for your happily haunted Halloween trip of a lifetime.

Are you excited for these new additions to come to Mickey’s Boo to You Parade? Let us know in the comments!