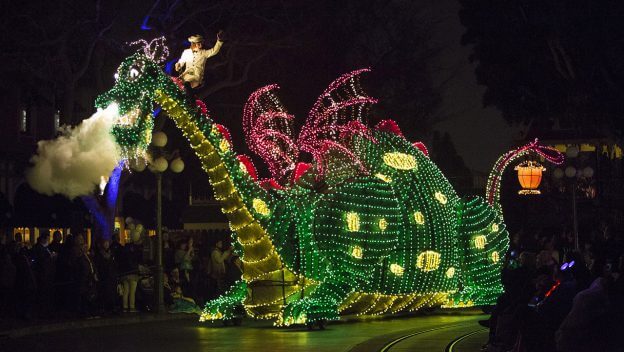 Missing the Main Street Electrical Parade? If you happen to have a Disneyland trip planned between August 2 and September 30, 2019, you’re in luck! The parade is returning to Disneyland for a limited engagement this summer, and if you can’t make it to see the parade in person, the Disney Parks Blog is live-streaming the parade’s first run on August 2 at 8:55 pm Pacific! Which you can see right here.

The Main Street Electrical Parade debuted at Disneyland 47 years ago and has historically been a favorite for guests (and admit it, you still have the Baroque Hoedown soundtrack in your head in the best way, right?!). The parade’s last limited-time run ended in 2017, and while it was unclear in the years since then if the parade would be making a comeback, fans are already sharing their excitement for its return, and we can’t blame them!

Known for it’s half-million sparkling lights and “electro-syntho-magnetic musical sounds,” the Main Street Electrical Parade is also remembered for the most nostalgic of memories for Disneyland locals and fans around the world. Whether the parade was part of your childhood (or perhaps your kids’ childhoods) or even if you’re seeing it for the very first time, you’ll want to set a reminder to catch its return live on the Disney Parks Blog!

Simply head over to the Disney Parks Blog to watch live, and plan to arrive early as the #DisneyParksLIVE hosts typically start the broadcast early and give opportunities for fans to tweet in and share their memories and thoughts on whatever is being aired that evening.

If you’re catching these “thousands of sparkling lights” in person grab a popcorn or a Mickey pretzel for us and everyone watching from home on August 2!

Will you be joining the Disney Parks Blog on August 2? Or will you be making it to Disneyland to see the Main Street Electrical Parade run down Main Street before September 30? Let us know in the comments!