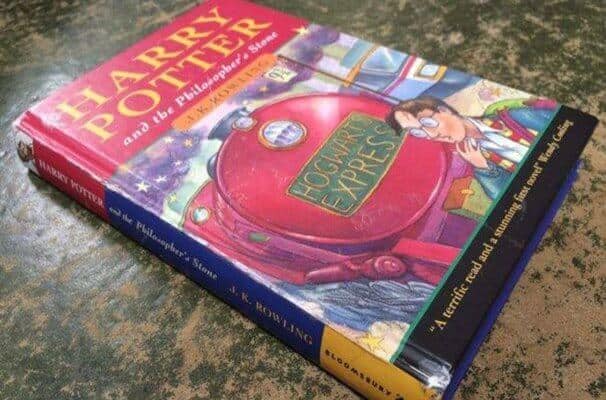 Most know the “Harry Potter” franchise from its incredible success in theaters. However, this mega-blockbuster film series was all started by a series of books. And as it turns out, it seems one special book in the original series is expected to bring in more than $50,000 at an upcoming auction.

Yes–you read that right, $50,000 for a single book! This book (pictured above), “Harry Potter and the Philosopher’s Stone” was bought for only $1.80 at a library sale. However, it turns out that this first edition copy is one of only 500 in the world and is now worth so much more! In April, a first edition copy of the same novel signed by author J.K. Rowling sold for about $90,000.

The owner of the book found the old copy in the back of their cupboard after buying it for next to nothing more than 20 years ago. Now, the book is up for auction at the end of this month on July 31 (the same day as Harry Potter and JK Rowling’s birthday) and Jim Spencer, from Hanson’s Auction, told the Daily Mirror they’re expecting “huge bids.”

“Only 500 were produced, 300 went to libraries, this is one of them,” said Spencer. He also went on to call it “the holy grail of Harry Potter books.”

Spencer says, “It’s a children’s book and a library book. Obviously those two combined mean that most of the ones you see are pretty tatty and torn and scribbled all over.”

According to Spencer, the book featured above is “a very good example” of the wear and tear a book this old might have on it.

If you think you may have the special edition book, be sure to look for these two mistakes as another means to make sure! One in the spelling of the word “philosopher” and the other is the repetition of “1 wand” in the list of equipment for Harry’s first year at Hogwarts.

What are your thoughts on this special edition book running for upwards of $50,000 at an auction? Let us know in the comments below!