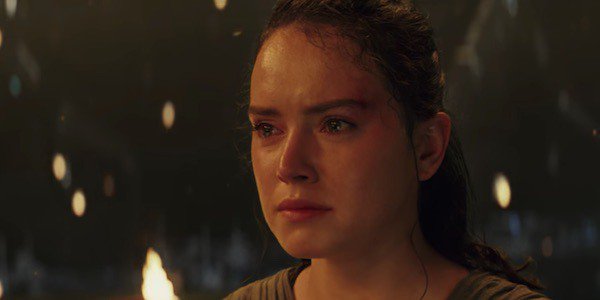 Even though the recent films in the “Star Wars” saga have been met with mixed reviews, Rey actress Daisy Ridley thinks fans shouldn’t be so negative. While fans are entitled to their opinions of the franchise, Ridley says there should be a way of having a discussion about the films without being “so vicious.”

In a July interview with Bustle, Ridley shared her feelings toward fan entitlement. The site brought up the fact that conversations within fandoms who disagree with the direction of a film or TV show, like those who were upset with the final season of “Game of Thrones” and the mixed reviews of “Star Wars: The Last Jedi,” often lead to conversations that aren’t very constructive.

“It’s great that people are expressive of their views,” Ridley said. “But this is people’s jobs. People worked really, really hard on that thing. I think there’s a way of having a discussion that isn’t so vicious.”

It’s safe to say that “The Last Jedi” has faced its fair share of viciousness. The film was met with possibly the most divisive reactions out of any in the “Star Wars” saga, with fans worldwide taking to social media even years after the film’s release to express just how unhappy they were with it. Ridley even recalls people in her personal life sharing their distaste for “The Last Jedi” right to her face.

“I was at my friend’s birthday and one of her friends, who I barely know, was like, ‘Hey, really liked the first Star Wars. Didn’t really like the second one,’ and I thought, ‘That’s rude, dude! That’s my job!'”

Just as “The Rise of Skywalker” will be the final installment in this current trilogy of “Star Wars” films, it may also be Ridley’s final bow as Rey. The actress confirmed that she won’t be starring in Rian Johnson’s upcoming “Star Wars” trilogy, nor does she have a role in D.B. Weiss and David Benioff’s trilogy of films. She’s expressed how difficult it is to get a widely positive reaction from fans, so we wouldn’t be surprised if this led her to want to take a break from “Star Wars” or even be done playing Rey for good.

Still, with or without an appearance from Rey following “The Rise of Skywalker,” fans will likely have mixed opinions of future “Star Wars” films either way. It’s no secret that the “Star Wars” saga is polarizing when it comes to fan opinions, and we don’t suspect that will change anytime soon. The films span across multiple generations with many fans feeling a sense of ownership over the original trilogy, some wanting to forget about Episodes I-III, and others who fall somewhere in the middle who think that the two most recent installments in the current trilogy (“The Force Awakens” and “The Last Jedi”) aren’t really as bad as some think. No matter where your opinion lies on the spectrum, remember that as Ridley said herself, the team behind these films works incredibly hard to bring these stories to life. And while it’s good to be critical, not all criticism is as constructive as you may think.

What do you think of Ridley’s view that “Star Wars” fans shouldn’t be so vicious? Let us know in the comments!