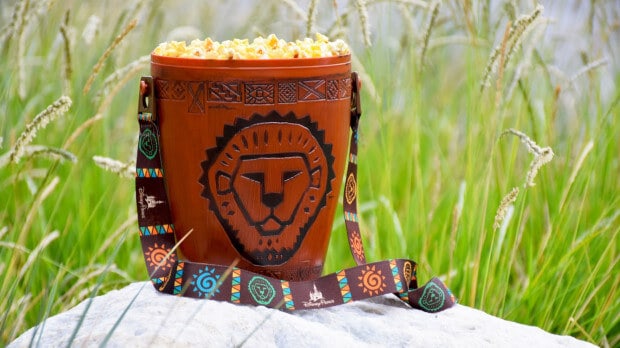 Fans of Disney’s “The Lion King,” be on the lookout on your next trip to Disney’s Animal Kingdom, because the park has just received its newest popcorn bucket and it’s themed after the beloved animated film and soon to be live-action/CGI remake!

As we shared earlier on our Instagram page, the bucket first premiered at Disney California Adventure Park a few weeks ago and today it seems the bucket has made its way over to the East Coast where it’s found its newest home. And we can’t think of a better souvenir to look back on your time in the Animal-themed park!

Oh I just can't wait to be King… Celebrate with this new popcorn bucket at Disney California Adventure Park.

The bucket is designed to look just like a wooden drum with a banner of decorative tribal carvings along the top and bottom of the bucket and one big carving of Simba on its front center. Similar to other Walt Disney World and Disneyland souvenir popcorn buckets, it also features a strap to hang around you to easily carry the snack tub during your time in the parks.

Matching in theming with the rest of the bucket, the brown material strap features vibrant and colorful graphic designs of Simba and the sun symbol featured in the animated film.

The bucket costs $14.99 and is available at popcorn stands found throughout the park. The bucket arrives just in time for a few of Disney’s celebrations of “The Lion King,” including the 25th anniversary of the animated version of the film and the release of the new live-action/CGI remake of the film coming next month.

If this new popcorn bucket isn’t enough Lion King-themed action for you, be sure to check out these all-new rum-infused Dole Whips, which give “Hakuna Matata” a new meaning!

Will you pick up this Lion King-themed popcorn bucket on your next trip to Disney’s Animal Kingdom? Let us know in the comments below!