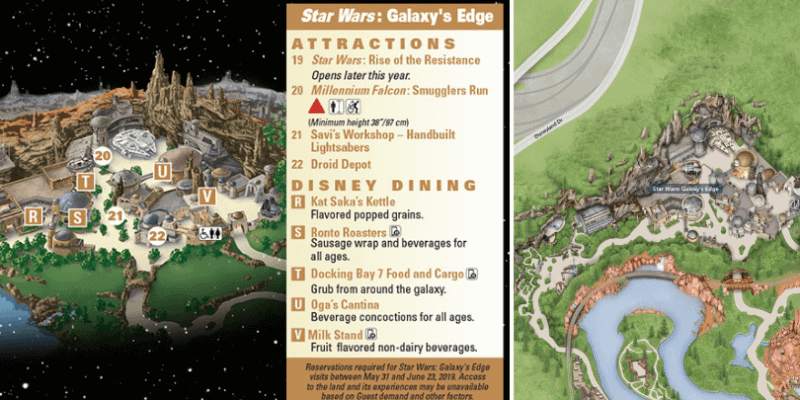 As Disney shared this week, Star Wars: Galaxy’s Edge will be “the largest and most technologically advanced single-themed land expansion ever in a Disney park.” Guests will enter Batuu and step into the world of the “Star Wars” films that they have only ever dreamt of for decades. The new land will be incredibly immersive with enough sights, sounds, smells, and experiences that will keep fans wanting more even after their initial four-hour visit.

The new guidemap confirms what Disney has previously shared about the 14-acre land. There will be three entrances: one near Critter Country, one near Frontierland between the Rivers of America and behind Big Thunder Mountain Railroad, and one behind Big Thunder Moutain Railroad and adjacent to the path between Frontierland and Fantasyland. The guidemap also reveals the locations of every attraction, merchandise location, and dining location within Star Wars: Galaxy’s Edge, which will allow fans to study the environment of Black Spire Outpost before their visit.

Additionally, Disney added Star Wars: Galaxy’s Edge to the Disneyland app. Now, users can get an even clearer view of the environment of Batuu, including the size of the new land in relation to the rest of the lands in Disneyland park. We’re so excited to finally see Star Wars: Galaxy’s Edge on the Disneyland app, as the arrival of the new land at Disneyland Resort finally feels real. We’re planning our first visit to Black Spire Outpost as we speak, and we’ll be sure to share all of our tips for your visit next week. For now, we’ll be staring longingly at the new guidemaps and patiently waiting to see the wait time for Millennium Falcon: Smugglers Run when the ride opens on May 31.

What do you think of the new guidemap for Star Wars: Galaxy’s Edge? Share your thoughts with us!