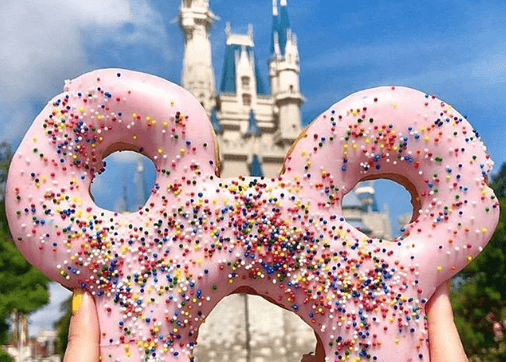 A few weeks ago, Walt Disney World’s Magic Kingdom debuted the all-new Mickey Celebration Donuts and not only are they HUGE, but they’re also one of the cutest nods to everyone’s favorite mouse!

No visit to the Disney Parks is complete without the perfect treat. And as we all know, Disney World is full of them, whether it’s Dole Whips, pretzels or cotton candy. However, this new treat takes the cake as it’s not only delicious but it’s also adorable!

Donuts have eggs in them, and the icing is strawberry flavoured so technically this donut is like super healthy ?

These new over-sized Mickey Celebration Donuts premiered in the park on May 9 and they’re massive. From their size, you could fit at least three normal sized donuts into just one of these! The donuts, which are modeled after Mickey Mouse’s iconic head, are currently available in two locations at Magic Kingdom. These include the Cheshire Café in Fantasyland and The Lunching Pad in Tomorrowland.

Do not miss out on this dessert in Tomorrowland. Starting May 9, you can pick up the brand-new Mickey Celebration Donut, which is basically as big as your face and comes with either vanilla, chocolate or strawberry frosting and sprinkles. #gma #goodmorningamerica #disney #disneyworld #disneysnacks #disneydonuts #disneyfan #disneytravel #disneylife #disneyfood #disneyparks

A post shared by EpicEscapesWithMelissa (@epicescapeswithmelissa) on May 8, 2019 at 5:23pm PDT

The Mickey Celebration Donut runs for $9 and is available in three flavors, which include chocolate, vanilla, and strawberry. Each donut is so big, they’re served to park guests in a massive pizza-style box.

As we all know, some of the awesome sweets that appear in the Disney Parks tend to only stick around for a limited time. Although, according to Delish, this sweet new treat is not limited-edition and is said to be sticking around for a while!

For those looking for something equally sweet but with a little kick, be sure to check out the King’s Cooler Dole Whip. This sweet and limited-edition treat is made with the infusion of pineapple Dole Whip with rum topped with a red syrup made up of watermelon and coconut.

Will you be buying yourself one of these adorable new donuts on your next trip to Magic Kingdom? let us know in the comments below!