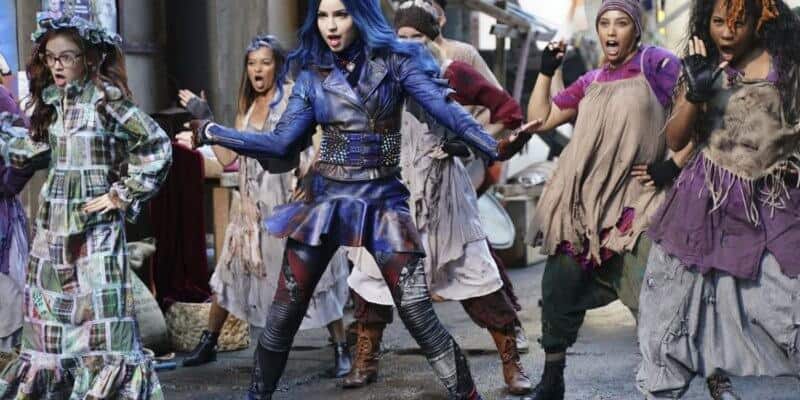 In Descendants 3, the four Villain Kids cross the barrier and return to the Isle of the Lost so they can bring back four more Villain Kids who deserve a fresh start too. As you can see from the new music video The VKs (Villian Kids) apply for the opportunity to join Mal, Evie, Carlos and Jay at Auradon Prep. Check out the video which also serves as the new movies opening scene.

We already know that Ursula’s daughter Uma (played by China Anne McClain) is back with a vengeance, picking up right where she left off in “Descendants 2.” Uma shared in a previously released trailer that while Mal and the rest of her friends were celebrating their new life in Auradon, Uma has been plotting her revenge. It appears she and Hades (played by Cheyenne Jackson) have joined forces to destroy Auradon.

That’s not all. We also know there will be a new villain – Mal’s father – one more element that will have Descendants fans on the edge of their seats.

All of these elements come together in another epic showdown between good and evil. How it will this confrontation play out? Will Auradon be saved, will the new VKs get a new life on Auradon or will Uma prevail this time? Of course to answer those questions you have to wait for the release of the movie on August 2nd.

Descendants 3 is directed by the newly announced Disney Legend Kenny Ortega. He also choreographed Descendants 3 with Jamal Sims. Disney also released a behind the scenes video of the new “Good to Be Bad” music video here.

Descendants 3 is the biggest Disney movie to come to the small screen in 2019.

How do you think it compares to some of the big productions coming to the Big Screen this year? Let us know in the comments below.