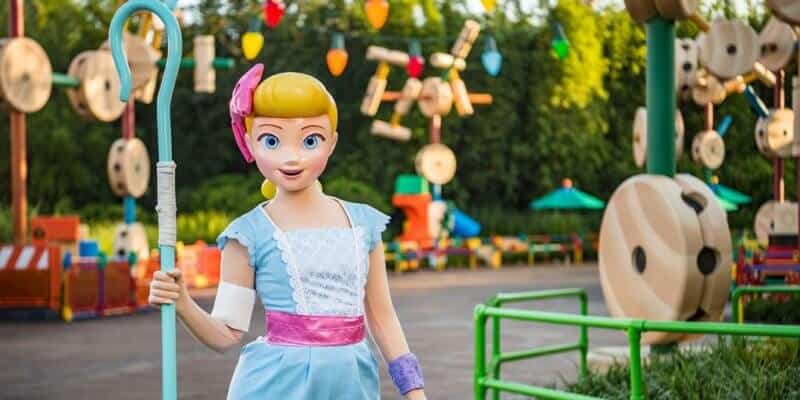 With the arrival of “Toy Story 4” right around the corner, we are getting ready for a fun-filled summer with Woody and the gang. And now, we can add meeting Bo Peep to our summer festivities. As we previously announced Bo Peep will be making a special appearance at the Disney Parks to greet guests. Now we know her appearance is only a few days away. Bo Peep will begin to appear next week.

It’s been 20 years since we’ve seen Bo Peep in theaters, and we’re excited to see this lost toy make a new comeback. Bo Peep has gotten limited screentime in the prior Toy Story movies, but in Toy Story 4 Bo Peep is such a featured character that the code name for Toy Story 4 before news of the movie was officially released to the public was “Peep.” From Inside the Magic’s conversations with the creative team behind Pixar’s upcoming movie, we know that Bo Peep will be just the strong athletic, feminine and independent toy that fans will naturally adore.

First, Bo Peep will be heading over to Toy Story Land at Disney’s Hollywood Studios starting next week. At the moment, you can plan on seeing her in Walt Disney World through late August. She will also be making appearances in other Disney Parks around the world later this summer. Exact dates have not been released yet so be sure to check back with Inside the Magic for those details.

“Toy Story 4” will arrive in theaters on June 21, 2019, and we are excited to see the next chapter for Woody and the gang. Bo Peep appears to be an integral part of the movie and we’re excited to see what she’s been up to all these years.

Are you excited to see Bo Peep greet guests this summer? Let us know in your comments below!