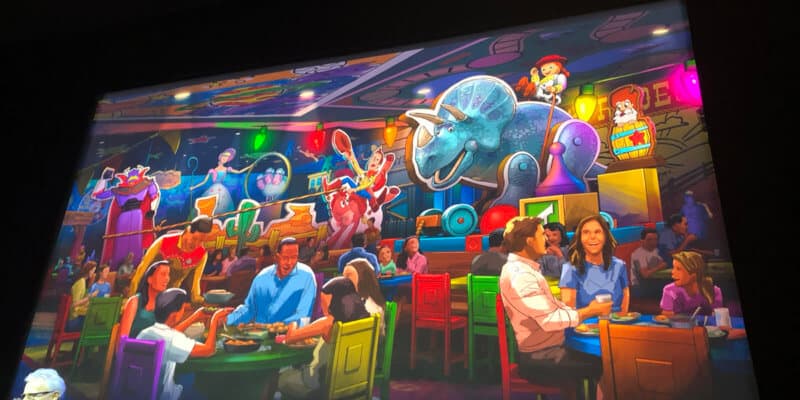 At a press event hosted by Disney, the company revealed a first look at a new table service restaurant coming to Toy Story Land at Disney’s Hollywood Studios, in addition to a new pop-up shop, which will celebrate “everything ‘Toy Story.'”

Upon opening, this new restaurant, which has yet to been named officially, will be the first-ever sit-down table service restaurant to be located in Toy Story Land at Walt Disney World. According to Phil Holmes, Vice President of Disney’s Hollywood Studios, the new restaurant “will be a kaleidoscope of toys, games, playsets and experiences like no other.”

During the reveal of the restaurant, Holmes continued that the restaurant will allow Walt Disney World to further immerse its guests into the world of “Toy Story.”

In addition to this exciting announcement, it was also revealed that Walt Disney World will take part in celebrating “Toy Story 4” with the premiere of a new pop-up shop to also be featured in the land.

According to Holmes, the “pop-up shop will celebrate not only “Toy Story 4″ but everything ‘Toy Story.'” Holmes did not reveal the type of merchandise to be featured within the shop. However, he did mention that it will “feature some of the great things coming out of the movie.”

The new shop will be located just outside of Toy Story Mania, located right in the center of the toy-themed land. During the presentation, Holmes did not reveal an official date for when the shop will open to park guests. Be sure to stay tuned to Inside The Magic as we wait patiently for the date!

What are your thoughts on a new table service restaurant coming to Toy Story Land? And are you excited for the new pop-up shop? Let us know in the comments below!