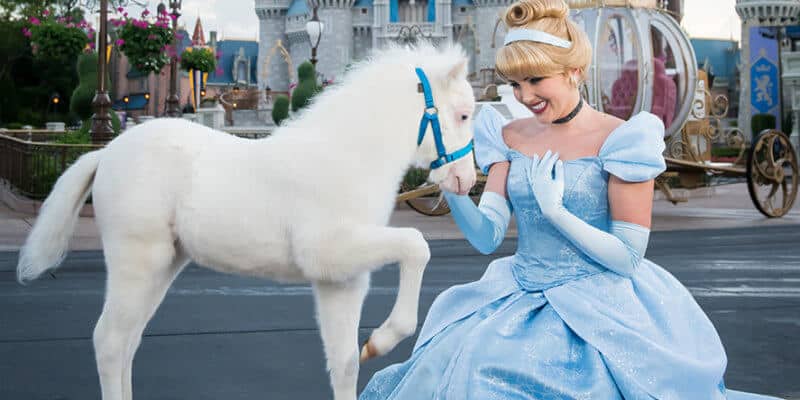 Take in an enchanting sight this Monday with a look at the most adorable and recent addition to Cinderella’s royal family: Lilly, the newest “Cinderella Pony” to come to Walt Disney World.

This cute little “Cinderella Pony” was born in March and according to Disney, became the first white Shetland pony ever born at the Tri-Circle-D Ranch at Disney’s Fort Wilderness Resort & Campground.

The sweet little pony got her name from Walt Disney’s late wife, Lilly and is a 100% purebred Shetland as both her mother “Lady” and father “Ferdiand” are Shetland ponies. Now of course, Lilly’s parents are no ordinary Shetland ponies as they are actually Cinderella’s ponies that pull her iconic pumpkin coach for Disney’s Fairytale Weddings and parades at the Magic Kingdom Park.

Reportedly, when Lilly turns two, she’ll be training to pull Cinderella’s magical coach and could then make her debut as part of the team, working side-by-side with her parents, as soon as a year later! However, until then Lilly will be making appearances in the show pasture near the barn at Disney’s Fort Wilderness Resort & Campground for a few hours each day (Lilly is currently being featured in the show).

According to Disney, Lilly has a lot of caregivers looking after her who will make sure she’ll grow up to be a happy and healthy living creature residing and working at the Walt Disney World Resort, “A team of 35 ranch hands care for Lilly and 90 other horses and ponies that support our daily operation of carriage, wagon, pony and trail rides, along with special events that add that special sparkle across the Walt Disney World Resort,” said Disney in a release.

Are you going to see Lilly in pasture near the barn at Disney’s Fort Wilderness Resort & Campground? Let us know in the comments below!