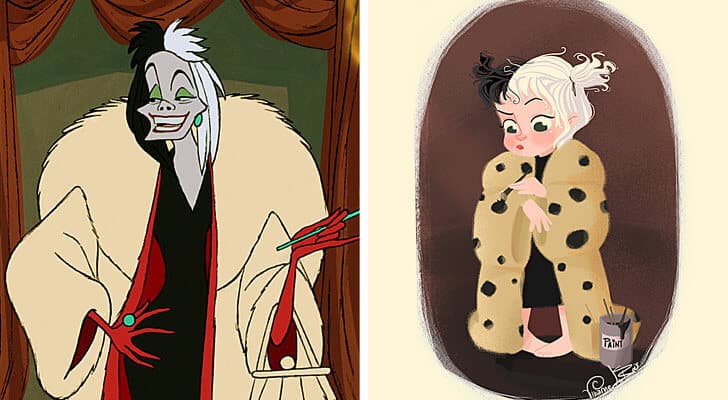 Everyone knows that the Disney Princesses and heroes have always stood at the forefront of most Disney fans’ childhood memories for their goodwill and ability to triumph over bad. However, one can’t forget the Disney Villains, whose wrongdoings made us all grimace and groan (and sometimes even cry) from all of their pent up viciousness and hate. But like everyone else, these heroes didn’t all start off bad and two artists wanted to highlight their happier and cuter beginnings in a series of cartoon portraits. Trust me, after you see just a few of these images, you’ll forgive them all!

Davy Jones — “Pirates of the Caribbean“

Most known as the swashbuckling pirate from the darkest depths of the seven seas, he’s been reimagined into the cutest little first mate. Just one look into those big blue eyes and you’d probably hand him all your gold doubloons.

You might remember Hades as the fast-talking god of the Underworld with a fiery temper. However, in this cartoon look, the god is adorable and subdued.

Seeing the new image on the right, it’s almost impossible to think this figure is the definition of pure evil, and responsible for all misfortune in King Stefan’s kingdom.

Queen of Hearts — “Alice in Wonderland”

This re-imagination still kind of shows the queen as a tyrannical and deranged ruler. Although her appearance is still much cuter, and in child form, she’s probably less likely to behead her subjects.

The villainous sea witch known for “helping” poor unfortunate souls looks harmless in her re-imagination. Seeing her in this form might make you wonder how she could have possibly been banished from Atlantica.

Probably the most fashion-forward villain of all time and she still has a knack for being well dressed, even as a little one. In her baby form, she’s much sweeter too, as she can be seen painting on spots instead of skinning helpless puppies.

The two not-so-nice stepsisters of Cinderella were vile and cruel as adults. But as little babies, the two are cute as buttons. I wonder if this was before the girls learned of envy and jealousy?

As lovely and sweet The Evil Queen appears as a baby, I’d still question whether or not it’d be smart to accept that apple.

The evil and bloodthirsty commander of The Jolly Roger in search of revenge against Peter Pan looks as sweet as pie as a baby. This little one is so cute, he should have been a Lost Boy himself!

As an adult, Jafar’s stiff demeanor might make you question how he became the Sultan’s most trusted and loyal councilman. However, as an innocent and precious little baby, I think it’s safe to say most would trust him with all of our worldly possessions, probably even our magic lamps!

The evil sorceress obsessed with killing the emperor doesn’t look like she could hurt a fly as a baby.

As a lady, she’s a cold-hearted and evil stepmother but as a baby, she’s a sweet little girl who we have to imagine is incapable of jealousy or any other psychological abuse for that matter!

Obsessed with youth and beauty, Mother Gothel finally found her way to the epitome of youth. And just think, she didn’t have to hoard Rapunzel’s magical golden hair to do so either!

A proprietor has never looked so sweet. Although, judging by the looks of that jewel in her hand, she may run a stiff trading ring on the playground.

Claude Frollo — “The Hunchback of Notre-Dame”

As an adult, Claude is a ruthless Parisian and as a child, he appears to be quite similar. I wonder if he’d be any sweeter to Quasimodo as a baby?

To see more from Vijolea and Chibi Magics, be sure to visit their official blogs.

What are your thoughts on these re-imaginations of some of Disney’s most infamous villains? Let us know in the comments below!