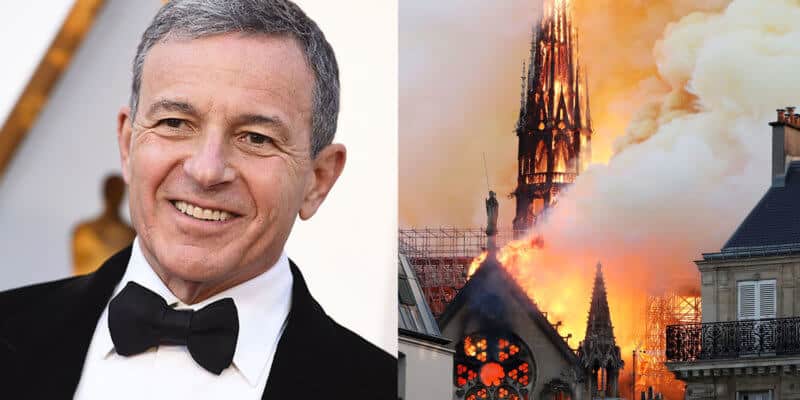 Bob Iger has committed $5 million from The Walt Disney Company to the rebuilding and restoration of the Notre Dame Cathedral after it was destroyed in a massive fire.

The fire seen around the world occurred Monday when the cathedral was first engulfed in flames. Investigators are looking into the cause of the fire but at this point in the investigation, the fire is being treated as an accident, which left the age-old structure in a shell of its once grand and towering state. Since the fire has been extinguished, the French President Emmanuel Macron has vowed to have the cathedral rebuilt within five years, which will require a lot of money. However, the cathedral is already seeing a great amount of monetary support, including that from The Walt Disney Company.

.@notredameparis is a beacon of faith, hope & beauty, inspiring awe and reverence. The Walt Disney Company stands with our friends & neighbors in Paris, with heartfelt support and a $5 million donation for the restoration of this masterpiece.

In a new tweet by Iger from this morning (April 17), the Walt Disney Company CEO replied to the official Notre Dame Twitter account expressing his condolences and offering to stand with the cathedral in its rebuild. “Notre-Dame is a beacon of hope and beauty that has defined the heart of Paris and the soul of France for centuries, inspiring awe and reverence for its art and architecture and for its enduring place in human history. The Walt Disney Company stands with our friends and neighbors in the community, offering our heartfelt support as well as a $5 million donation for the restoration of this irreplaceable masterpiece,” said Robert A. Iger, Chairman and Chief Executive Officer, The Walt Disney Company.

According to ABC 7 Chicago, many believe Macron’s goal of rebuilding the structure in only 5 years might be a little unrealistic. However, many worshipers and high-powered individuals from around the world have already poured massive amounts of money toward the project. Currently, it is believed that the rebuild has collected nearly $1 billion in donations.

Other companies who’ve chipped into the structure’s rebuild include oil and gas giant Total, which contributed 100 million euros, L’Oreal, Bouygues construction group, whose CEO Martin Bouygues and his brother Olivier have committed to donating 10 million euros.

Comments Off on Bob Iger commits donation from Walt Disney Co. to restoration of Notre Dame