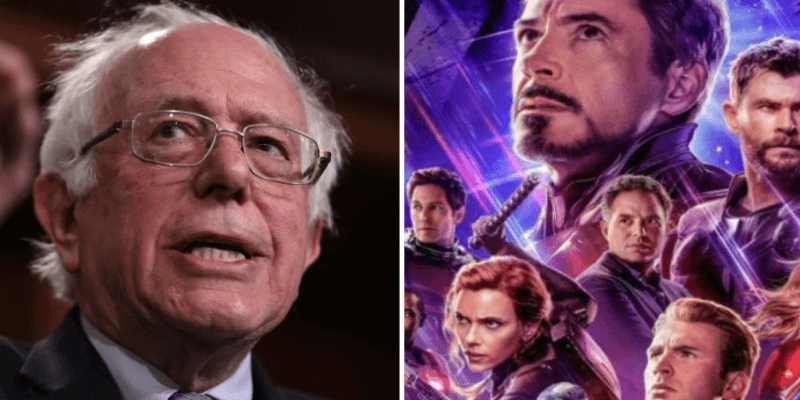 “Avengers: Endgame” seems to be taking over the internet since it broke records at the box office last week. Now, even politicians are getting involved in “Endgame” discussions…and sharing how they think The Walt Disney Company should share the movie’s profits. Senator Bernie Sanders has made it clear what he thinks Disney should do about how much money “Avengers: Endgame” has made so far, and it involves raising the salary of thousands of Disney employees.

The Independent Vermont senator, who is also running for the Democratic presidential nomination, took to social media to share his thoughts about what he believes would be a “heroic” move for Disney. Sanders wrote on Twitter that the company should use its profits from “Avengers: Endgame” to “pay all of its workers a middle-class wage, instead of paying its CEO Bob Iger $65.6 million – over 1,400 times as much as the average worker at Disney makes.”

What would be truly heroic is if Disney used its profits from Avengers to pay all of its workers a middle class wage, instead of paying its CEO Bob Iger $65.6 million – over 1,400 times as much as the average worker at Disney makes. https://t.co/NrcFSk4LZc

In his Tweet, Sanders cited an article from Bloomberg, which shares that “Avengers: Endgame” had an all-time high of $1.2 billion worldwide in box office returns in the film’s opening weekend.

The senator’s criticisms of Iger’s pay come not long after Abigail Disney, heiress to The Walt Disney Company and Roy O. Disney’s granddaughter, shared her take on how much money Iger is making compared to Disney employees. Abigail Disney even went so far as to write an op-ed for the Washington Post after The Walt Disney Company defended its pay model for employees and Iger.

Like Abigail Disney, Sanders has been critical of The Walt Disney Company’s practices for some time now. Last August, the senator praised Walt Disney World Resort’s unionized workers after negotiations with the company resulted in the workers securing a $15 minimum wage. And at a rally back in June, Sanders spoke of The Walt Disney Company when he said he wants “to hear the moral defense of a company that makes $9 billion in profits, $400 million for their CEOs and has a 30-year worker going hungry.”

The Walt Disney Company has yet to respond to Sanders’s Tweet regarding how to distribute “Avengers: Endgame” profits, and we aren’t sure if any Disney spokespeople will make a public statement regarding the issue. Still, given all of the hype surrounding the record-breaking profits of “Endgame” and the most recent criticisms of how Disney distributes pay to both higher-ups and the working class, we’re interested to see if either Sanders’s or Abigail Disney’s comments will have an impact on the company’s practices moving forward.

We’ll continue to update this article as this story develops.

What do you think of Senator Sanders urging Disney to use “Avengers: Endgame” profits to raise employee wages? Share your thoughts with us in the comments!

Comments Off on Sen. Bernie Sanders urges Disney to use “Avengers: Endgame” profits to give employees raises