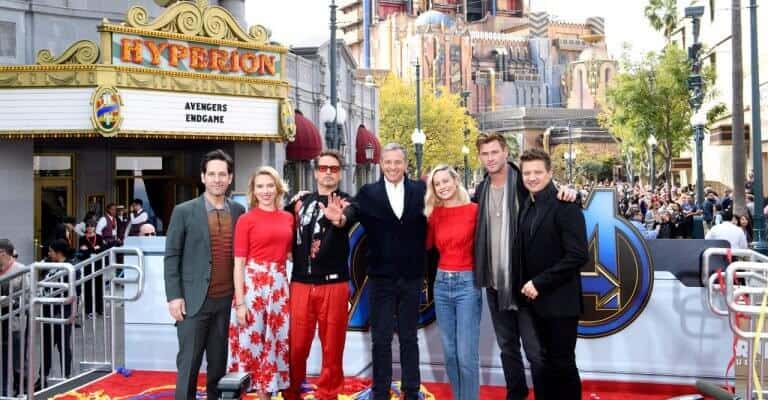 “The superheroes in Avengers personify traits like courage, perseverance, bravery and hope – the same traits countless kids and their families in children’s hospitals exhibit every day,” said Robert A. Iger, chairman and CEO of The Walt Disney Company, at the event. “We are grateful to have the Avengers cast take time out of their day to be a part of this effort to lift spirits and bring comfort to children during a difficult time.”

The Walt Disney Company has had a longstanding commitment to helping hospitalized children and their families around the world, so it’s inspiring to see the “Avengers” stars join Iger to celebrate the work being done to help the children who need it the most.

Throughout their short time at Disneyland Resort, the “Avengers” stars didn’t forget to celebrate. The actors joined kids from the Boys & Girls Clubs of Anaheim and Garden Grove to play and build LEGO at The LEGO Store in Downtown Disney. The kids were treated to a visit by Amazon’s Treasure Truck stocked with “Avengers: Endgame” toys, as well. Several of the actors even took to social media to share snippets of their day.

Actor Jeremy Renner, who stars as Hawkeye, shared a video of the Avengers on Guardians of the Galaxy: Mission BREAKOUT!

So 4 avengers on the Guardians Of the Galaxy ride!!! @disneyland @marvel @chrishemsworth Rudd and Scar jo !! #avengersendgame #avengersPRESSTOUR #

Paul Rudd, also known as Ant-Man in the MCU, shared some pictures of the actors’ time onstage commemorating the Avengers Universe Unites event.

And Robert Downey Jr., the original Iron Man, shared a video of his dance in celebration of the start of the “Avengers: Endgame” press tour.

Of course, several lucky fans visiting Disneyland Resort had the opportunity to snap a pic with the actors. One fan and annual passholder, @teamdisneyland on Instagram, shared some photos and footage she took while attending the event. How awesome would it be to get a selfie with Thor himself?

Were you one of the lucky fans who got to see the “Avengers: Endgame” stars launch Avengers Universe Unites at Disney California Adventure?