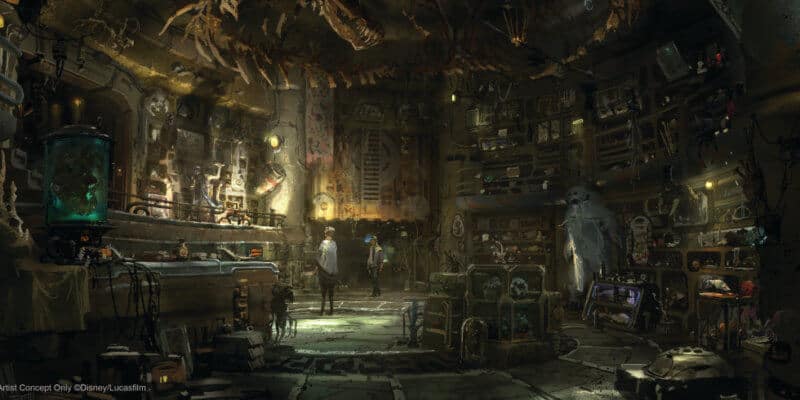 When Star Wars: Galaxy’s Edge opens in only a few months, guests to the Disney Parks will be transported to another galaxy, where they’ll get to experience a mission on the Millennium Falcon and eat intergalactic food offerings. And one other exciting experience found in the new land is Dok-Ondar’s Den of Antiquities, where guests can experience a shop run by a hammerhead alien carrying lightsabers and various Jedi Sith artifacts. Here is a look at the upcoming attraction.

This new experience coming to Star Wars: Galaxy’s Edge is where you’ll find many various items from the “Star Wars” films, including legacy lightsabers inside glass cases, and a wooly Wampa lurking in the rafters. But be warned, according to OC Register reporter Brady MacDonald, you’ll want to watch your step in this shop as you don’t want to mess with Dok, which could get you on his bad side.

“Dok-Ondar is a force to be reckoned with,” said Walt Disney Imagineering managing story editor Margaret Kerrison. “He may be 245 years old, but he’s not feeble. He’s been around and he’s very well connected. He’s a very dangerous guy.”

According to MacDonald, Dok’s Den will be the best place in all of Black Spire Outpost village to find intergalactic black market goods. In the shop, guests can find Jedi and Sith artifacts and different treasures from the many eras of the Star Wars Galaxy. Additionally, the shop will stock pre-built legacy lightsabers to be themed after “Star Wars” characters, such as Shaak Ti and Ahsoka Tano.

Disney released concept art of the new shop, which shows skeletal remains of extraterrestrials hanging from the ceiling and different aliens floating in glowing glass cylinders. In the image (featured at the top of this article), an upper balcony can also be seen featuring souvenir spoils from throughout the Star Wars galaxy.

“He has such a large collection that everyone actually knows him,” said Imagineering creative producer Brian Loo. “He no longer has to travel because all his clients come to him instead.”

MacDonald explains that the name of the shop “Den of Antiquities” is a play on the fact that the shop traffics illegal interstellar goods.

“We knew that we wanted to meet an Ithorian in our land,” Kerrison said. “We just fell in love with him from the beginning because his story is that he is the gatekeeper of the black market.”

When the shop does open with Star Wars: Galaxy’s Edge, shoppers will be able to purchase merchandise on the lower level with Dok watching from a distance. Reportedly, every item in the shop has a story, with some stories more dangerous than others, according to StarWars.com

One of the more exciting and interactive experiences coming to the shop is an audio-animatronic Dok who will be tending to his financial ledgers, answering calls and surveying his inventory while sitting on an elevated perch within the shop. During the day, Dok may grow angry when he gets calls from intergalactic criminals trying to stiff him on business deals. However, counting his galactic credits or looking over a bookkeeping ledger are said to brighten his mood.

As previously reported, guests will be able to barter with Dok over the price of merchandise with a Disney employee standing by.

“He’s always diligent as to what’s going on within the shop, counting his money, making sure that nothing has been taken or missing in his collection,” Beatty says. “When you go to buy something, you can interact with him from time to time.”

It should be noted, MacDonald reports that you probably won’t get a discount from Dok and you may end up walking away paying more than the sticker price after haggling with the robotic businessman. “I’ve never known him to give a deal,” Beatty said.

But, according to Imagineers, if the price is right, Dok will be willing to trade anything from his collection.

MacDonald reports that during his tour of the themed land, he also received a preview of the Dok-Ondar animatronic figure in action, which he says was programmed by Imagineer Amy Goodwin with questions.

“Hey Dok, he thinks you’re overcharging,” Goodwin told the animatronic shopkeeper. “Can you give him a discount?”

MacDonald says the creature responded in an alien tongue with the lips along his two mouths moving as he spoke.

From this interaction, it’s probably safe to say the animatronic figure will not actually speak to guests but his personality should be discernible to visitors from his visible mood.

“Storywise he always has a reason to switch between them,” Goodwin said. “He never randomly goes from happy to frustrated. There’s always a reason for it.”

According to Goodwin, Dok’s responses are built out of blocks of animation clips that combine into a playlist of short scenes. “It’s not pulling at random, but it still gives that feeling of randomness,” Goodwin said. “If you sit there and watch, there’s never going to be an hour that’s exactly the same as any other hour that he runs because of how he transfers between these little scenes that he has.”

Guests can experience Dok-Ondar’s Den of Antiquities when it opens at Star Wars: Galaxy’s Edge May 31 at Disneyland and August 29 at Disney’s Hollywood Studios in Florida.

What are your thoughts of this intergalactic shop coming to Star Wars: Galaxy’s Edge? Let us know in the comments below!

Comments Off on In-depth preview of Dok-Ondar’s Den of Antiquities at Star Wars: Galaxy’s Edge