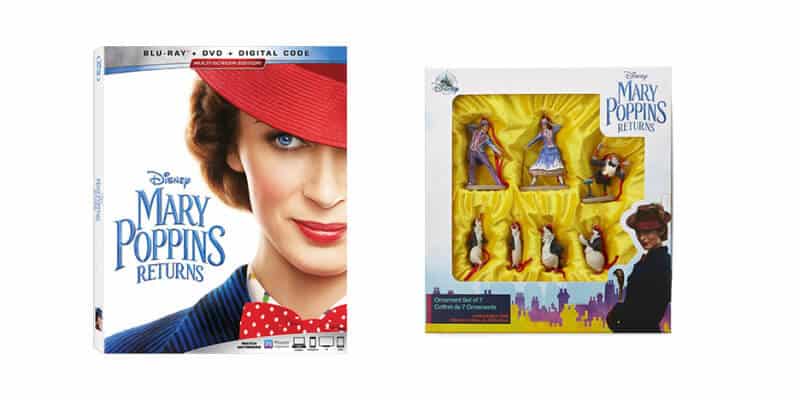 Our giveaway has ended and we are excited to announce that Kevin B. was the winner of Mary Poppins Prize Pack. Brian, please be on the lookout for an email with the details to redeem your prize. His prize was made possible by our friends at Walt Disney Home Entertainment.

If you didn’t win be sure to order your copy of the Mary Poppins Return Blu-ray at Amazon.

You can enter NOW for this amazing prize. Contest ends on Monday, March 19th at 11:59 pm PST.  Enter to win using the entry form at the bottom of this post.

Like so many of our giveaways, we give everyone who enters the chance to win additional entries if you spread the word and share your LUCKY URL with friends and family. We also have other options to earn bonus entries such as: Sharing the giveaway on Facebook & Twitter, Following us on our Social Media accounts AND subscribing on Facebook Messenger.

Bonus material explores the making of “Mary Poppins Returns,” going behind the scenes with the star-studded cast and crew who collaborated to make even the impossible possible. Extensive extras include a trip down Cherry Tree Lane with original cast member Dick Van Dyke, a sing-along version including the heartfelt Academy Award-nominated “The Place Where Lost Things Go,” bloopers, deleted scenes, a deleted song and filmmaker commentary. Features also reveal the magic and moxie that went into creating large-scale musical production numbers, such as “Trip a Little Light Fantastic,” a rousing song-and-dance number led by Jack and his fellow lamplighters; “The Royal Doulton Music Hall” and “A Cover Is Not the Book,” showcasing the tremendous talents of  Blunt and Miranda; “Turning Turtle,” an upside-down sequence featuring Meryl Streep as Mary’s eccentric Cousin Topsy; and “Can You Imagine That?” an underwater adventure with Mary Poppins and the Banks children.

During a special Q&A at the Walt Disney Studios, Rob Marshal, along with Angela Lansbury, who surprised media who attended, talk about the film and what it took to bring this movie to the big screen. Also how the entire Cast wanted to be part of this project, sending the message of light and hope to the world. Check out the Q&A below.

We had the opportunity to speak with John Myhre, production designer, about bringing the sets to life in modern-day London. Myhre worked closely with Marshall and Director of Photography Dion Beebe to create the visual world audiences see on-screen. From locations to backgrounds and practical sets, his department of art directors, draftsmen, concept artists and model makers, helped to support the story and the story of the characters from a visual standpoint.

Locations included: St. Paul’s Cathedral, Buckingham Palace, the Tower of London, Cowley Street, Queen Anne’s Gate, the Royal Exchange, Cornhill, Middle Temple, and King Charles Street, many of which required detailed set dressing to obscure any modern additions. And each was carefully lit and shot so as to best showcase the city’s true beauty. In fact, the opening musical number, “Underneath the Lovely London Sky,” while visually establishing the darker times of London, is “a love letter to London,” which eventually became Myhre’s design philosophy.

The filmmakers chose to shoot on locations throughout London to give the film a more grounded sense of realism, so that the wonder, color, and fantasy that comes when Mary Poppins arrives, are the perfect departure from the real-world issues taking place at the time.

Myhre loved London and was excited to film in the city. One of the challenges he ran into was how to make the buildings look like that period in the movie. It took a lot of work to dress the city, the bank was one of the challenges and an important character since it’s the villain in the movie. The Royal Exchange which is now a shopping mall was shut down on the weekends, roads were covered, period lights were brought in, 6 double-decker buses and period cars were also added to create that look. The filmmakers wanted the real look of London and had to be really gritty.

The set for Topsy’s Fix-It Shop which took seven months to complete was the most time-consuming to construct and decorate. Oscar-winning set decorator Gordon Sim and his team began shopping at antique markets throughout England for items to decorate the set, ending up with more than 538 in total. The next several months were spent hollowing out the heavier items purchased, including a grand piano and 14-foot marble statue and making plastic duplicates of the fragile items including Staffordshire figurines and china serving ware. It was very difficult to move anything that was on the ceiling because everything was bolted to a steel frame that was up high.

Myhre did extensive research to ensure the London on screen was authentic to the London from the ‘30s, but at the same time showed an enormous amount of creativity and imagination when designing the numerous environments constructed on soundstages. Eight soundstages at Shepperton Studios were used to build and house the astounding practical sets for Cherry Tree Lane, Topsy’s Fix-It Shop, Big Ben, the interiors of the Banks home and the enormous abandoned park.

The Cherry Tree Lane set was the largest, taking 18 weeks to complete. It was designed to take audiences back to the first film and create a feeling of having been there before, but at the same time needed to visually tell a story taking place in Depression-era London.

“Mary Poppins Returns” will be packaged and released in several different formats, giving families the flexibility to watch it on a variety of different devices. Viewers can instantly watch the film in Digital UHD, HD, and SD, and bring home a physical copy of the film as the Ultimate Collector’s Edition (4K UHD, Blu-ray, and Digital Code), Multi-Screen Edition (Blu-ray, DVD, and Digital Code), a single DVD or a Digital Bundle with both “Mary Poppins Returns” and the 1964 classic “Mary Poppins.”