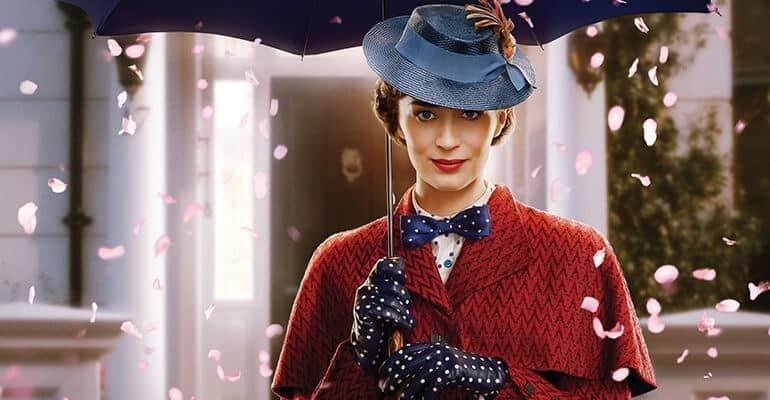 THAT’S NOT AN EXAGGERATION when I say I’m a “Mary Poppins” superfan. As a child, I drove my father insane by begging him to watch the movie back-to-back, three times a day. It’s no surprise that in 2013, he refused to see “Saving Mr. Banks” with me. “It’s about ‘Mary Poppins’!” I said, but he pretended not to hear me.

So, when I heard a sequel was on the way, I was extremely excited but knew this wouldn’t be the same as “Mary Poppins.” Without the involvement of Walt Disney and Julie Andrews and the music of the Sherman Brothers, how could it be? This is a new story, but in “Mary Poppins,” the spirit remains.

Enter Mary Poppins (Emily Blunt). During the buildup to her big entrance, you can’t help but feel emotional, like an old friend is returning. From the moment she arrives, it’s clear Blunt is not just doing an imitation of Julie Andrews in the role; it’s her version of Mary Poppins, but it feels like the same person.

In the 1964 movie, Dick Van Dyke played Bert, friend and dance partner, to Mary Poppins. In this movie, Lin-Manuel Miranda essentially has to follow in Van Dyke’s footsteps as Jack, a lamplighter who’s familiar with Mary Poppins and her magical ways. Blunt and Miranda have great fun together on screen, especially during the gorgeous 2D-animated song and dance number.

The entire 2D animation sequence is stunning and funny, and it’s a welcome throwback to an old-school style that we don’t see on screen anymore. In fact, according to director Rob Marshall, animators had to be brought out of retirement to create that sequence. Plus, the penguins from “Jolly Holiday” return for a brand-new dance routine.

As for the music, the soundtrack doesn’t feature instant classics like the original movie, and there are fewer musical moments overall (excluding the overtures, there are nine new songs in “Mary Poppins Returns,” compared to 16 pieces in “Mary Poppins”). But there are a few gems, especially “Trip a Little Light Fantastic,” which is this movie’s equivalent to “Step in Time.” This is possibly the best moment in the film, coming closest to “Mary Poppins” perfection. The song features Jack, Mary Poppins, the Banks children, and a slew of toe-tapping Leeries, Jack’s fellow lamplighters. It’s a big, joyful sequence with fun lyrics (“So when your troubles are incessant/Simply be more incandescent/For your light comes with my lifetime guarantee”) that will leave you with an enormous smile on your face. Likewise, “Nowhere to Go But Up,” sung by everyone in the main company, is a spirit-lifting tune.

Early on, it was made clear that Julie Andrews would not make a cameo in “Mary Poppins Returns,” but she did give her blessing to the movie and casting of Emily Blunt. Though part of me wished she would make an appearance, her reason for turning it down made sense. If she had suddenly appeared on screen, it would have been impossible to go on believing the story when the “real” Mary Poppins was right there in front of us.

Luckily, Dick Van Dyke’s cameo fit seamlessly into the new story. I knew he’d be playing Mr. Dawes, Jr., the son of the character he played in addition to Bert in the first movie because I’d already cried happy tears when he was featured dancing on a desk in the trailer. Just like Mary Poppins’ big entrance, you can tell exactly when Van Dyke is about to appear, and he makes the whole thing feel full-circle and wonderful.

Also revealed in the trailer, Meryl Streep and Angela Lansbury appear in the movie as Mary’s cousin Topsy and The Balloon Lady, respectively. As expected, they both elevate the film to another level of joy. Colin Firth’s role as William Weatherall Wilkins, the new director of Fidelity Fiduciary Bank, felt a bit out of place in the world of “Mary Poppins,” but Firth was excellent, as always.

“Mary Poppins Returns,” unlike the first movie, features more of a traditional plot. There are even a couple of high-stakes, all hands on deck moments, whereas, in the original, the “scariest” moment was Jane and Michael running through the streets of London after fleeing from the bank with their tuppence.

The first movie is all about the fleeting nature of childhood, and Bert drives that point home to Mr. Banks by singing, “You’ve got to grind, grind, grind at that grindstone/Though childhood slips like sand through a sieve/And all too soon they’ve up and grown/And then they’ve flown/And it’s too late for you to give/Just that spoonful of sugar to help the medicine go down.” There’s no real villain in “Mary Poppins”; Mr. Banks can’t see past the end of his nose. Once he does, it’s time for Mary Poppins to move on.

“Mary Poppins Returns” is more about how we respond to things outside of our control, like grief and hardship, affecting kids and adults alike. When life and other people bring us down, how do we hold on to that sense of childhood joy when bad things happen? It’s not easy, but thankfully we have Mary Poppins to remind us.

Now, for my fellow “Mary Poppins” superfans, here’s a list of Easter eggs I spotted in the movie. Skip this section if you want to be surprised!

Easter eggs in “Mary Poppins Returns” (Skip if you want to be spoiler-free!)

Disney’s “Mary Poppins Returns” opens in theaters on December 19, and you can watch the trailer below.

Also, be sure to check out the costume and props display from the El Capitan Theatre.