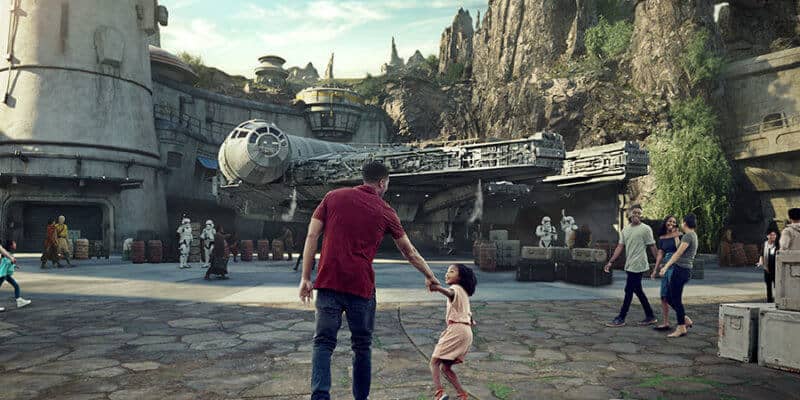 Star Wars: Galaxy’s Edge will be seeing all-new out of this world experiences when it premieres with its two new highly anticipated attractions, but the land will also be offering even more immersive activities with the help of the Play Disney Parks mobile app. Disney just released new details about the Galaxy’s Edge/Play Disney Parks app integration following the premiere of the land’s food and beverage and merchandise offerings.

The Play Disney Parks app first premiered last summer, offering guests to the Walt Disney World and Disneyland Resort theme parks brand new interactive adventures and experiences that bring surrounding environments to life. This was also around the time we first heard that Star Wars: Galaxy’s Edge would be utilizing this new app. However, how greatly the app’s integration would be interwoven into the land was not known, until now.

As part of the app’s integration into Star Wars: Galaxy’s Edge, D23 has revealed the app will provide new opportunities for guests to engage with the land, like translating a galactic language, learning what’s hidden inside crates and containers, and accomplishing certain tasks by participating in missions.

Additionally, the app will allow guests to interact with a variety of elements found around the land, including antenna arrays, door panels, drinking fountains, droids, media screens, and ships.

During the opening of Toy Story Land at Disney’s Hollywood Studios last year, we got the chance to speak with Josh Gorin, Executive R&D Imagineer at The Walt Disney Company, about this special addition to the new land. “We were working directly with that team to integrate this layer of interactivity from the very start so that when our guests do finally get to encounter Black Spire Outpost, we think Play Disney Parks will be a very important tool for interacting with the population of that area,” he said.

Star Wars: Galaxy’s Edge does not have official opening dates on either coast, but we know the land will open at Disneyland in Summer 2019. Walt Disney World’s version of the land at Disney’s Hollywood Studios will open in Fall 2019.