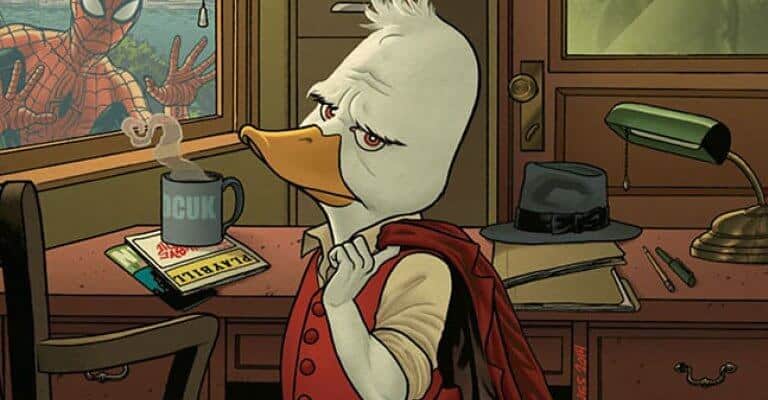 Marvel and Hulu are teaming up for a new slate of four animated series for adults, including one based on Howard the Duck, which will culminate in a special called “The Offenders.”

Similar to how the Marvel series “Jessica Jones,” “Iron Fist,” “Luke Cage,” and “Daredevil” built to the miniseries “The Defenders” on Netflix, Hulu’s deal also includes four shows and a special. The Hulu animated series will be based on Marvel characters MODOK, Hit-Monkey, Tigra & Dazzler, and Howard the Duck. All four shows and the special will be overseen by Jeph Loeb, head of Marvel Television. Here’s more on each show, courtesy of The Hollywood Reporter:

• M.O.D.O.K. centers around an egomaniacal supervillain with a really big head and a really little body, who struggles to maintain control of his evil organization and his demanding family. Writers Jordan Blum and Patton Oswalt will also executive produce.

• Hit-Monkey tells the tale of a wronged Japanese snow monkey, mentored by the ghost of an American assassin, as he cuts a wide swath through the Tokyo underworld in this darkly cinematic and brutally funny revenge saga. Writers Josh Gordon and Will Speck will executive produce.

• Tigra & Dazzler Show is a story about two woke superheroes and best friends, Tigra and Dazzler, as they fight for recognition among powered people who make up the eight million stories in Los Angeles. Writers Erica Rivinoja and Chelsea Handler serve as executive producers.

• Howard the Duck is trapped in a world he never made, but America’s favorite fighting fowl hopes to return home with the help of his unstoppable gal pal Beverly before the evil Dr. Bong can turn him the crispiest dish on the menu. Writers Kevin Smith and Dave Willis will also executive produce.

• The Offenders follows MODOK, Dazzler, Tigra, Hit-Monkey and Howard the Duck as they are all forced to team up in order to save the world and certain parts of the universe.

Of these characters, Howard the Duck is probably most well-known to casual Marvel fans. He was the star of a 1986 live-action movie which featured Lea Thompson and Tim Robbins and was executive produced by George Lucas.

Disney, the parent company of Marvel, will soon own the majority of Hulu as part of the Fox merger deal. Marvel is also developing content for Disney’s upcoming streaming service, Disney+, including a spinoff series based on The Vision and Scarlet Witch.

Release dates for Hulu’s new animated Marvel shows have not been announced.